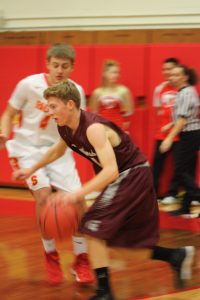 Berthoud Curtis Peacock makes a move during the game versus Skyline on Jan. 6.
Angie Purdy/ the Surveyor

Of all the intangible aspects of athletics, passion ranks as one of the top rungs on the ladder of importance. And it is passion Berthoud High boys head basketball coach, Mike Burkett, feels his team is lacking.

Berthoud’s losing streak hit double-digits on Tuesday night as the Spartans were walloped 80-37 on their home floor by No. 8-ranked (4A) Holy Family.

“We talked a lot this week about playing with emotion versus playing with passion, emotion goes up and down, passion stays. Some of our kids just don’t have that passion, they want to play, they like playing, they like having that uniform, but it’s not so important to them,” Burkett said after the game. “You have to want to compete … that has to be a deep desire. We have to figure out how to get them there, and we’re trying.”

Things got away from Berthoud not long after the opening tip. A game that was scoreless for the first three minutes quickly turned into an 8-0 Holy Family advantage just a minute later. The Tigers built a lead of 17-4 after the first quarter and extended it to 33-11 by halftime. Berthoud struggled coming out of the break and were out-scored 24-6 in the third.

“Their footwork is phenomenal, they have five guys who are in unison in defensive position at all times … guys are doing what they’re supposed to,” Burkett said of the Tigers. “That’s just a well-coached team that plays basketball the way it’s supposed to be played. Everything I am trying to get done here, [Holy Family Head Coach] Pete [Villecco] does there.”

Point guard Curtis Peacock, who scored Berthoud’s first points of the game when he swiped a steal and drove nearly the length of the court for a lay-up, explained, “They’ve just been competing for a long time with the same process. We want to try to aspire to be something like them one day; we just have to keep working toward that,” pressed further, Peacock replied, “I think it really starts with our defense, if we can get stops on defense and push the offense we will start getting some things to work on that end of the floor.”

Peacock has seen his playing time increase over the course of the season as he has grown more comfortable and confident on the floor. The sophomore is one player Burkett praised for the passion with which he plays, passion Burkett hopes is contagious.