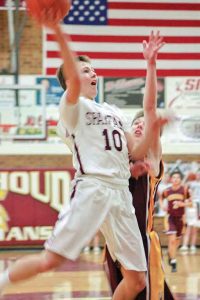 Berthoud’s Jake Yuska goes up for a shot during the Spartans game against Windsor on Jan. 20 at Berthoud High School. The Spartans lost the contest
69-55.
Angie Purdy / The Surveyor

The last thing the struggling BHS basketball team needed was to face a pair of the state’s top-10 teams. Yet, you cannot control your schedule, and the Spartans were handed their 14th and 15th losses on the year by Windsor and Mead. The Wizards bested Berthoud 69-55 at the BHS gym on Jan. 20 and before Mead nearly doubled-up the Spartans, 87-47, on Tuesday night.

The Spartans kept the game with Windsor competitive for the first two quarters, but a 22-10 third quarter by the visiting Wizards put the game out of Berthoud’s reach. A stellar performance by senior Karsten Bump, who made four treys and led the Spartans with 17 points on the night, was not enough to overcome the four Windsor players who eclipsed double-figures in scoring.

In hosting Mead on Jan. 24, things got away from Berthoud quickly as the visiting Mavericks out-scored their hosts 24-9 in the opening eight minutes and then 29-10 coming out of the locker room after halftime. The Spartans did have five players drain shots from downtown in the game, but Mead was simply too dominant up and down the floor for the outcome of the game to ever be in serious doubt. Curtis Peacock scored 11 for Berthoud and J.T. Lozinski added 10 more for the Spartans.