It’s all about peaking at the right time. 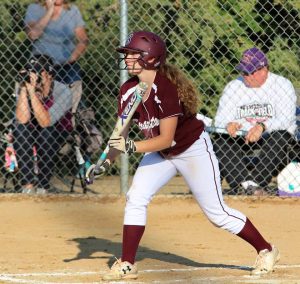 Berthoud senior Tristan Pope prepares to lay down a bunt in last week’s game against Holy Family at BHS. Berthoud won their last three games and will begin postseason play on Saturday.

As winners of their final three regular season games, all against formidable Tri-Valley Conference (TVC) competition, the Berthoud High School (BHS) softball team enters the postseason on a hot streak. Berthoud beat Holy Family 7-4 last Wednesday and then topped rival Windsor by a 5-4 final the next afternoon.

“I think it’s gigantic, it’s gigantic for us,” Head Coach Buddy Kouns said. “How they’ve rallied, how they’ve taken care of business and how they’ve kind of come together, it’s remarkable. I’m thrilled with the progress they’ve made. We’re playing our best softball right now.”

Against Windsor in the regular season finale, the first four Lady Spartans to come to the plate scored. Leadoff batter Sarah Jorissen reached on an error and came home when Delaney Fouts singled. Ashlynn Balliet then reached on a fielder’s choice, advancing Fouts to scoring positon at second base. A single from Sedona Cook and back-to-back doubles off the bats of Addie Spears and Tristan Pope followed to give Berthoud an early four-run lead.

With the lead, Jorissen pitched aggressively, attacking the strike zone and surrendered only two hits and zero runs through her first four innings inside the circle.

Yet on the third time through the order, the Lady Wizards began to claw their way back into the game. A walk and pair of singles got Windsor on the board in the top of the fifth and a pair of Berthoud fielding errors, a single, a sacrifice bunt and some savvy base-running brought three more home in the sixth, knotting the game four-all.

Berthoud had a golden opportunity in their half of sixth to reclaim the lead, as Jorissen and Jordan Schachterle led off the frame with back-to-back hits, chasing Windsor starting pitcher Tiana Spangler from the game. After Windsor recorded the first out of the inning on a pop fly, Balliet was able to put the ball in play, but Schachterle was thrown out at home thanks to excellent play in the field from the Lady Wizards.

Berthoud matched their visitors’ defensive wizardry in the top of the seventh. Anna Lowndes singled with one out and appeared poised to score when Spangler tripled on a deep fly ball. Berthoud’s left fielder Sophie Supernor fielded the fly ball cleanly and threw a textbook relay throw in to Spears at shortstop, who then pivoted and threw a perfectly-placed ball to catcher Mandi Laib to tag Lowndes out at home, preserving the tie.

The seventh got off to an inauspicious start to win for Berthoud as their first two batters were quickly retired on fly balls. With two outs and no one on base, Laib stepped into the batter’s box and turned on a pitch, lacing the ball into left field.

“She was one of the slower pitchers that we’ve seen so far and it was actually coming down the middle for me and I’m one of those hitters that likes to pull it from time to time and that’s where I get most of my power,” Laib said, and added that, off the bat, she thought there was a good chance the ball would get out of the yard.

With Laib at second it was Supernor’s time to shine. The junior did not wait long, hitting the first pitch she saw into left field, allowing Laib to come home without even a chance for there to be a play at the plate.

“This is the first pitch in this game that I had actually been looking for that pitch. It was right down the middle too. I really kept my eyes on it this time and I felt it was a great connection,” said Supernor of her game-winning hit. “We know going into the postseason, in the tight games, someone has to step up and today it’s a face that hasn’t done it yet this year and that’s huge. I’m thrilled for Mandi,” Kouns said.

Pope explained that, even though Berthoud’s road this season has been somewhat rocky at times, everything and everyone has been coming together late in the year. Said the senior, “We’ve had so many obstacles this year, and we’ve overcome so much, both on and off the field. We learned what it was like not to click and we’ve overcome it … these last four games we brought the energy, we played together, we’ve had this great chemistry.”

She continued, “We all talked and we had to come through our difficulties and our obstacles, we grew as a team, we came to understand each other as individuals and not just as players.” Pope has been key for Berthoud in the team’s late-season run by getting timely hits, scoring five runs and playing excellently at first base.

Berthoud finished the regular season 12-7 overall and 8-6 in TVC play, good enough to secure the 13-seed in the 32-team 4A regional field. The Lady Spartans are bracketed with No. 4-seed Discovery Canyon, Pueblo County (20) and Montrose (29). Two teams will emerge from the double-elimination bracket and make a trip to the state championships. The first games at this Saturday’s regionals are set to begin at 10 a.m. at Discovery Canyon High School in Colorado Springs.