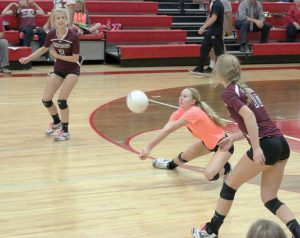 Haley Hummel digs a serve from Skyline as Alyssa Peacock and Hannah Atkinson look on.
Paula Megenhardt / The Surveyor

The Skyline Falcons didn’t stand a chance against the positive attitudes on the other side of the net. Berthoud went into the match against Skyline feeling relaxed and confident. It showed by sweeping the Falcons in three sets: 25-19, 25-11, and 25-20. Coach Daisha Agho was a little more apprehensive.

“I was a little bit nervous coming into tonight’s match. I know how [Skyline head coach] Will [Rozum] prepares his team for other teams. We adjusted to the short serves, which worked on us last time,” said Agho.

Haley Hummel led the Spartans with 23 of the team’s total 74 serves made, and she had 4 ace serves. Hannah Atkinson had 13 total kills and 2 blocks.

“Their middle back is phenonmenal and we kept hitting at her. We had to find the spot where she isn’t on the court,” said Agho.

Berthoud did find enough spots on the court where the Falcons weren’t. In the third set, at 22-14, Agho gave Atkinson, Julie Ward and Madi White a well-earned rest to give other players some court time.

“Overall, awesome job, I’m very proud of them. With the match we have Thursday night, it’s great to have some momentum.”

The Spartans play Mead on Oct. 2. 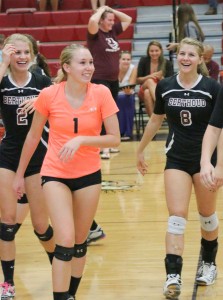 Alyssa Peacock, left, Haley Hummel, center, and Jessa Megenhardt, right, with coach Agho in the background, show their emotions with the win over Erie in 5 sets on Sept. 25.
Paula Megenhardt / The Surveyor

Spirits were high and excitement was in the air at the BHS gym as the Spartans started the match with a comfortable win in the first set. The Tigers took advantage of missed connections in the front line of the Spartans to take the second set.

Erie took the lead 12-6 in the third set when Hannah Atkinson had a definitive kill that seemed to flip the momentum. Alyssa Peacock, hit the right spots serving, which helped bring the score even at 12-12. Once again, Erie had another run of 6 to 19-13, and this time, Berthoud didn’t recover.

The Spartans shook off the losses to win the fourth set in dramatic fashion putting down 13 kills in the set, one play had Jessa Megenhardt bump-setting from in front of the bleachers to Shaylee Pierick at middle who slammed it down on the Tigers. Julie Ward also had powerful kills in the set, proving that she’s past the freshman jitters, matching Pierick’s 4 kills in the set to solidify the win.

“I think I have a lot more confidence in myself. And I think it showed in the fourth set,” said Ward.

Berthoud carried the momentum through to the end. The teammates were truly in each other’s heads, putting together perfect plays to win the fifth set and the match.

“We have been working as a team really hard to get our intensity level up. We realized the desperation of the situation and that lit a fire under everyone. We didn’t want to lose to anyone, especially not Erie,” said senior Madi White, who had 21 serves made in the match.