His first stint ended with a state championship. 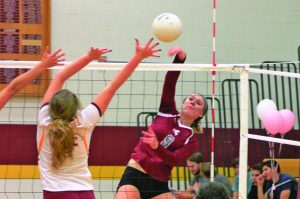 Photo by Paula Megenhardt – Berthoud’s Julie Ward goes up for a kill against Skyline in the 2016 season. Ward is just 147 kills shy of the 1,000 kill milestone.

Santos, who served as Berthoud’s head coach from 1995-2000 and again from 2002-2008 before taking on the role of varsity assistant under Daisha Agho from 2009 through last year, will shepherd a young but experienced BHS squad through a Tri-Valley Conference (TVC) that represented one-quarter of the 4A state pool last season.

“I learned a lot more the last few years, just stepping back because it wasn’t my program, I was able to watch and see what worked, what doesn’t work,” Santos said at practice Monday afternoon. “Coach Agho kept this program pretty darn nice, very competitive.” Agho’s teams posted winning records and earned a spot in the state tournament in each of her final three seasons as head coach.

The roster Santos inherits may be young in years but is long in experience. Berthoud returns seven players who saw meaningful varsity floor time last season. Led by star senior outside Julie Ward, whose 379 kills and 376 digs not only paced the Lady Spartans in both categories but ranked first and fifth, respectively, in the TVC, the Lady Spartans’ goal is to make it back to state for the fourth consecutive season.

“I know that we are all striving to get back to state this year and do better at state this year, and so I know that we’re going to work as hard as we can, even if it’s just going through ball-control or working up in the weight room, we’re going to do all we can,” Ward explained. The senior outside has tallied 167, 307 and 379 kills in the last three seasons, putting her just 147 shy from the astounding 1,000 career-kill milestone.

Berthoud enters the 2017 season with an experienced roster but will be tasked with replacing three now-graduated seniors, including setter Jessa Megenhardt, the 2016 TVC Player of the Year and an All-State honoree, as well as one front row and one back row starter from last year. Santos explained he has not yet made a final determination on the critical setter position and he is still deciding whether the team will operate primarily out of the 5-1 or 6-2 system, but he has confidence in this group’s ability to fill the voids left by graduation.

Santos said Trinity Penny and Cas Berry, both sophomores who were regular parts of Berthoud’s rotation as freshman in 2016, have been getting reps at setter in practice. Ward explained the team will have to adjust to a new setter but Berry’s experience in that role in the past will be beneficial.

“(Berry) was a setter when she was younger, and it’s really nice because she knows that the pass isn’t always going to be perfect, and she knows where the passers are coming from, where the hitters are coming from, so she knows definitely when we ask her to do something she understands it,” Ward said, and added, “Our team dynamic is not really changed at all because the majority of the team is back from last year. I think the only real different thing is to figure out where everyone is going to be.”

With a team that has loads of experience in the fundamentals of the game as well as excellent on- and off-court chemistry, the focus has been on building up speed and strength. Said Santos, “We’re working on getting the tempo a little faster…. why…. because when we go to the state tournament the winners are always very strong and very fast, the top four teams are always like that and we want to be that same kind of conversation.”

He continued, “We have to develop some speed, we have to develop some strength, and we have to, of course, be flexible when it comes to offense and defense. We can’t be stagnant … there has got to be some flexibility, maybe just a different look for a different team. That way, when they study our film before we play them, we can do something slightly different, so any wrinkle like that will be beneficial to us.”

The Lady Spartans begin the year as the No. 7-ranked team in Class 4A and will play their first match on the road at Greeley West on Aug. 29. Berthoud’s home-opener comes on Sep. 5 when they will welcome TVC rival and 2016 4A state runners-up Holy Family to the Rusty Mathena Gymnasium at BHS.