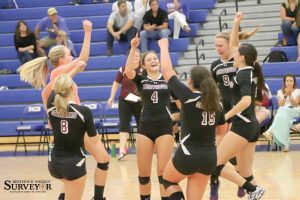 Even though they have just barely begun the 2015 season, the Berthoud High School (BHS) volleyball team is on its way to earning the moniker “the cardiac Spartans.” Berthoud’s first two non-tournament matches of the year – at Resurrection Christian on Sept. 3 and on their home floor on Sept. 8 – were about as thrilling as they get.

Asked after the win over Erie if these kind of nail-biting performances are indicative of how Berthoud volleyball is going to play this season, Head Coach Daisha Agho said with an energetic laugh, “I hope not, because my heart isn’t going to be able to take it.”

Taking a more serious tone, Agho noted, “We don’t have any of the cohesiveness yet on the court … and a lot of that goes with communication; we have to know our jobs on the court and we’re not quite there yet.”

The seeds for the come-from-behind win were planted in the first two sets, both won by Erie, but saw Berthoud rally from deficits ranging from five to 10 points. A serving error by Berthoud at the end of set one gave the Tigers their 25th point and in the next set they held off a run that saw the Lady Spartans score nine of 11 points to quickly reduce a commanding 20-10 Erie lead to just 22-19.

“I think maybe sometimes we assume it’s going to be easy and then we realize we’ve really got to pick up our game, and that’s when we start fighting,” said setter Jessa Megenhardt, who recorded 49 assists in the match. “It’s all mentality; it’s all in our heads.”

Faced with a 6-3 deficit in set three, Berthoud took control, attacking and defending as well as they had all night, taking a 13-7 lead, one they would not relinquish for the remainder of the set.

The Lady Tigers had some fight left, however, and quickly opened up with a 7-1 lead that extended to 11-4 in the fourth set. Yet, as they had all evening, the Lady Spartans went on a run to score seven consecutive points, knotting the score at 11.

Agho noted that when Berthoud gets behind, “They take the pressure off themselves and they just want to go out and play then. I told them they’re the comeback queens because all of a sudden there’s no pressure and they think ‘we’re down 1-7 now no one expects us to win,’ so the pressure is off.”

The teams traded points throughout the remainder of the fourth set. Berthoud ultimately won when senior Emily Trujillo scored with an offensive block to give the Lady Spartans the 28-26 win, sending the match to a decisive fifth set.

After taking an 8-3 lead, Berthoud allowed Erie some life as the visitors scored four consecutive points to get to within one. The Tigers tied the game at 11 and again at 14, but an attack by Julie Ward, her 20th kill on the night, clinched the set and with it the match for the Lady Spartans.

Megenhardt believes the hard-fought victory will be helpful for Berthoud as the season progresses.

“I think it will help us know that no matter how much we’re down we can come back and we can win,” she said. “It really helped us, we were really together as a team, we didn’t give up on each other and that’s really big.”