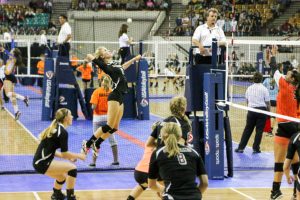 Berthoud senior Alyssa Peacock takes her turn at working toward a kill against Lewis Palmer at the state championships on Nov. 7 at the Denver Coliseum.
Paula Megenhardt / The Surveyor

The Lady Spartan volleyball team wrapped up the season with a banquet to honor and thank the players and supporters Nov. 10. Seniors Hannah Atkinson and Alyssa Peacock, and sophomore Jessa Megenhardt were honored as All-Conference players; senior Madi White received an Honorable Mention.

Atkinson, who led the Tri-Valley Conference in kills (303) and kills/set (3.6), was one vote shy of Player of the Year. Head Coach Daisha Agho was voted as Conference Coach of the Year. And what a year it was.

The Spartans finished 20-7 overall (12-2 Tri-Valley Conf.) and earned a coveted spot at the state championships that has not seen a Berthoud team since 2008. Haley Hummel finished the year as Colorado’s digs leader with a total of 696. Megenhardt ended the season as the TVC’s No. 1 in assists in and fourth in class 4A behind setters from Ponderosa, Cheyenne Mountain and Lewis-Palmer. 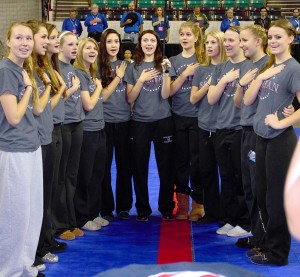 Paired with the No. 1 seed and defending champions, Lewis-Palmer, for the first match is rather unnerving. Lewis-Palmer, with a 27-0 record, is also ranked nationally at No. 2 by Maxpreps.

“LP is LP, and their reputation precedes them,” said Agho. “I knew when we got the eighth seed before regionals that we would meet them at state once we took our region.

“To be honest, the first thought I had was that we could be David in the David and Goliath scenario, or the Cinderella team that knocks off the No. 1 seed…not likely but I had to believe.”

Each point scored against the Rangers in the first two sets was celebrated. Anything the Spartans could take from their opponent was a mini-victory. Berthoud lost 10-25 and 7-25.

“Defending the court against them was really hard because they had very strong, smart hitters, which caused us to only have a single blocker up at times,” libero Hummel said.

The Spartans found their rhythm in the third set, forcing Lewis-Palmer to call two timeouts at 7-7 and 16-17. The Rangers eventually took the set 20-25.

“It was so much more exciting and fun than the first two sets,” Hummel said. “We were digging balls from such good hitters, which really fired us up and gave us the confidence we needed to stick with them.”

Berthoud freshman Julie Ward found success hitting low against the immense blockers, leading the team with seven kills for the match. Berthoud middles Shaylee Pierick and White both put up big blocks defending their side and scored on two apiece. Megenhardt also earned bragging rights for blocking 6-foot-1-inch outside hitter, Alexa Smith, who played for the USA Volleyball Girls Youth National Team and will be playing for Purdue next year.

White expressed respect for the Rangers.

“Lewis Palmer is an amazing team,” she said. “Any time you go against a team that good it is intimidating. I think we were intimidated by the venue and we let the nerves get the better of us.” 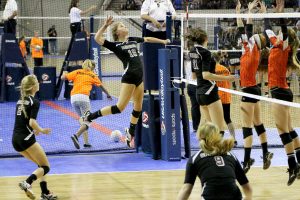 Berthoud’s Hannah Atkinson goes up for a kill against Lewis-Palmer in the first round of the state championships on Nov. 7.
Paula Megenhardt / The Surveyor

Agho summed up the match by saying that it was difficult to get fired up for a game that’s essentially “for fun.”

“The girls came out fired up and ready to play, shutting down their outside and right side, but that eventually took its toll and the girls struggled to keep them contained in the second game,” Agho said.

On top of that, the girls were told that morning, right before the match, that the game would only be two-out-of-three instead of three-out-of five, adding more insult to injury, according to Agho.

In the third set, the Spartans were down 20-24 when the Kadets sent the ball out of bounds. Hummel followed with an ace serve. When Berthoud had the opportunity to tie at 24, the down referee called a touch on White for an out-of-bounds ball. It was strongly argued since the ball didn’t appear to have changed directions and White didn’t claim responsibility for it.

“We regrouped for the third and, unfortunately, dug a hole too early and made a valiant effort to come back, which they did,” Agho said.

But ending the game, match and season on a controversial call by the official was a tough pill to swallow.

“The girls are tough, and this one hurt,” Agho said. “Regardless of the ending, the overall successes of this team and all of their accomplishments are amazing.”

White, who graduates at semester, could have wrapped up her high school days last spring but decided to stay and play one last season of volleyball.

“I was really worried about coming back this year, but I am so happy I did,” White said. “The team this year became like a family and I am so proud to be a part of it. I would not trade this last semester, or this last season, for anything. I love these girls and they are the team I will remember.”

Through misty eyes, Agho beamed about her team.

“I cannot express in words how proud I am of this team and the season they had,” Agho said. “Their hard work and determination on and off the court is to be celebrated. I am very grateful to have had the opportunity to work with such an amazing group of young women.

“I instilled in this team that they won’t ever get to play together again as a way to get them to stick together through regionals and eventually state. It’s now become a reality and hard to let this team and season go because of all of the wonderful things they have done and the relationships we have created.”