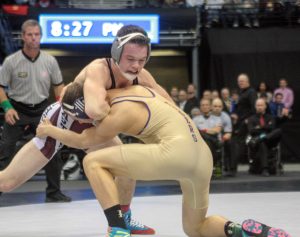 As in all sports, wrestling can create moments of immense joy and heartbreak. Emotions range from high school freshmen just starting their competitive four years up to seniors knowing their days as a high school competitor are over. Championship competition elevates those emotions by the sheer grandeur and finality of the moment.

In the tunnels below Pepsi Center, during the Colorado High School Activities Association’s wrestling championships, athletes wrestle with their own thoughts. In these catacombs, far from the view of the parents, fans and crowd, you see all of these young men’s raw emotions; both in victory and, particularly, in defeat.

Berthoud High School’s (BHS) wrestlers came away with all kinds of emotions from the state tournament, including joy and heartbreak, but most importantly all six Spartans experienced positive outcomes moving forward.

In competing against the best in the state, each of these young men can hold their heads high knowing their hard work and effort made Berthoud proud on the biggest stage in wrestling.

Fate ended his season undefeated, 46-0, and repeated as a state champion. He made it look easy, but it wasn’t as seamless as it appeared on the surface.

Many wrestlers feel the semi-finals have the most stress of any bout; they can taste it in the semis on how close they are to a state title. They win and they’re guaranteed the final championship match; lose and they’re fighting their way through a full day of consolation matches for – at best – a third-place finish.

Fate had his front tooth dislodged in the semifinals and had to straighten it back into place during the match. These kinds of moments could side-track a less focused athlete, but champions are made in these moments when adversity presents itself. Fate simply bared down and blocked out any distractions on his way to the finals. There is an old adage that says “I don’t care how stormy the seas are, just bring the ship home.” Bring the ship home was exactly what Fate did.

Fate had the difficult task of wrestling Holy Family’s Joseph Prieto (37-8) for the fourth time this season to claim his second state title by a 7-3 decision. Beating an elite opponent twice is difficult, three times is even harder.

“So many people expected me to win, but that pressure fuels my fire to win,” said Fate. “I can’t say either year was harder than the other, it’s just different, it’s a different kind of battle against every opponent, but this year definitely had a lot of depth in my weight class.”

Fate was also named the Outstanding Wrestler for 3A classification and finished the season as a two-time state champion. He’s also won 75 consecutive matches over the past two years.

“It’s difficult to beat a quality opponent multiple times in a season and it gets tighter and tighter each time and Jimmy had to do that in a very short period of time” said Head Coach Scott Pickert. “Jimmy did a great job of staying on track and understanding what he needed to do to win.” 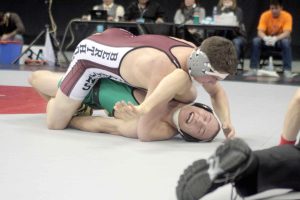 Berthoud’s Chad Ellis wrestles Delta’s Kory Mills in the 3A 170-pound championship match on Feb. 21 at Pepsi Center in Denver. Ellis won the match and his first state title.

Three matches later, up stepped the next opportunity for Berthoud to claim another state champion in a proud history of Spartans wrestling. Ellis, after a third-place finish at state last year, wasn’t going to be denied this year in his quest to stand atop of the podium.

As Ellis warmed up along the side of the mat prior to his championship match, he glanced two mats down and caught the eye of the 170-pound Thompson Valley wrestler, Mike Berg, and clapped his hands aggressively, nodding his head as a form of encouragement for his fellow competitor from the north and a way to pump himself up a bit more. Ellis was indeed pumped; he pinned the Delta state runner-up by fall at 3:09.

“I was listening to a song called ‘I Can Only Imagine’ by Mercy Me leading up to coming out for the championship match, thinking about what was ahead of me and trying to imagine a winning outcome,” Ellis said. “To come out and see all of the Berthoud fans filling the section right above our mat helped inspire me, and it shows how great Berthoud is to have so many fans and people who support us.”

As every state contestant can attest, opponents get tougher and tougher as they work their way through the bracket. Ellis battled his way through Denver North’s Adrian Perez (29-14) Tech Fall at 4:51 (18-3); Moffett County’s Stelios Peroulis (25-9) by major decision, 11-3; Pagosa Springs’ David McRee (31-6) by decision 8-2, ultimately matching up against Cory Mills (39-9) from Delta.

“It feels great to have both Jimmy and Chad win the state title,” said Coach Pickert.

While Fate and Ellis were favorites to win the title, 120-pound sophomore Matthew Bailey wasn’t shouldering any pre-tournament expectations of a title. Bailey saw, in the 120-pound bracket, four opponents who had defeated him earlier in the year, and he was destined to wrestle each and every one of them. His march through each win created confidence and momentum for the young Spartan. His tournament started by besting Sterling’s Jacob Breidenbach (32-13) by decision 9-2; then on to Brandon Damian (39-7) from Valley by decision 11-7; and finally in the semi-finals he was matched up against a quick and rugged Macky Sandoval (28-10) from Brush, where Bailey earned a well-wrestled 12-6 decision before settling for the state runner-up title after a 9-1 decision setback to the no. 1 seed at 120 pounds, Andrew Jaramillo, (24-7) from Platte Valley.

“At first it was a little intimidating to see all of those wrestlers I had wrestled this year as higher seeds, but as I started winning I kept getting more and more confidence,” said Bailey, “The state championships were definitely amazing and it makes me want to come back and win it.”

Bailey’s confidence rose at the right time at the state tournament, but it didn’t come by accident. That confidence was laid on a foundation of hard work, knowing and understanding what his strengths were and trusting his training, coaches, and his own determination for excellence.

“Matt had a heck of a tournament to make the finals as a sophomore,” said Pickert. “He came in here and didn’t let the moment be too big or get big-eyed under the lights and all the mats at the championship tournament.”

Other BHS wrestlers results from the state tournament: