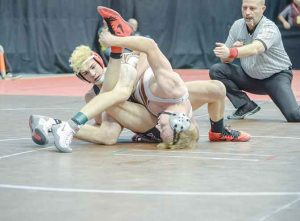 The Berthoud High School (BHS) wrestling team, long the most successful program in the school’s athletic department, took six wrestlers to the annual state tournament at the Pepsi Center in Denver last weekend. It was a younger-than-usual contingent representing BHS at the state championships; two freshman and two sophomores were joined by a pair of older classmates.

By the conclusion of the weekend tournament, a pair of Spartans – senior Matt Bailey and sophomore Austyn Binkly – medaled in the annual meeting of Colorado’s best high school wrestlers. Bailey finished in fifth place in Class 3A’s 138-pound division and Binkly took third in 132s; it was the second time in their respective high school wrestling careers that each earned a place on the podium at state.

The tournament marked the conclusion of the storied career of BHS wresting coach, Scott Pickert, who has announced his retirement from coaching. Pickert will be succeeded by his long-tenured lieutenant, Wil Carron.

Binkly, who entered state with Berthoud’s winningest record on the season at 43-9, won his opening round match with a 9-4 decision over Matthew Broughton but lost in the subsequent championship quarterfinals to ultimate state-champion Kyle Cisneros. The 3-0 decision Cisneros won over Binkly was the former’s closest bout of the tournament.

The sophomore, who placed sixth at state last year after a back injury forced him to withdraw from his fifth-place bout, won with 7-5, 5-2 and 6-3 decisions to advance to the bronze-medal match. Yet it was in the consolation quarterfinals where Binkly faced off with Bennett’s Garret Miller, who had gotten the best of Binkly in the pairs’ earlier two matches, including the week prior at regionals.

Binkly maintained in the run-up to state that he was, “getting closer and closer,” to the Tiger senior and “Even [Miller’s] coaches said he was going to be nervous,” for the rematch. Binkly won the match with a 5-2 decision and, two rounds later in an epic match, bested Dylan Yancey of Platte Valley with a 5-4 overtime decision to take third, the best showing by a Spartan at the state tourney.

The third-place bout in 3A 132s was one of the closest the tournament’s final day. Binkly scored two on a reverse in the third period to take 4-3 lead, but Yancey was awarded a point on an escape in the final seconds, sending the match to a fourth period where Binkly gutted-out the 5-4 win and the third-place medal that came with it. 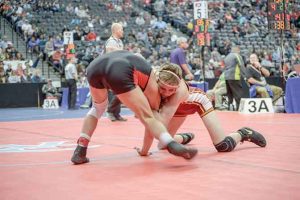 Bailey, who took second place at state as a sophomore in 2015, entered this year’s championships as a four-time qualifier. The senior also won his opening round bout, pinning Michael Hertrich just 59 seconds into the second period. Like Binkly, however, Bailey’s quest for a state title ended in the championship quarterfinals where he was pinned by eventual state-champion Noah Hermosillo of Eagle Valley in 3:10.

Bailey won a major decision, 16-5, in the second-round consolation before pinning Johnathan Pena in 2:18 in the third round. In the consolation semifinals, Bailey fell to Alamosa’s Devon Atencio in a 10-4 decision. Bailey closed out his high school wrestling career with a 3-1 decision over Hunter Branson of Holy Family to take home the fifth-place medal.

Berthoud’s other four wrestlers all fell in the preliminary round and moved to the consolation bracket. Freshman Dalton Williams in the 106-pound class won via the fall in a lightning-quick 34 seconds over Will Villalobos in the first round but then dropped his second match on Friday afternoon in a 4-2 decision to Carlos Hutchings of Salida. Fellow Spartans freshman L.T. Torres lost in a major decision, 20-2, to Lucas Comroe of Eagle Valley in the second round consolation in 113s and Miguel Sarmiento lost a 4-2 decision to La Junta’s Noah Barrett.

The Spartans’ heaviest wrestler to qualify for state was junior Wyatt Lasron, who competes in the 170-pound class. Larson, who like Bailey and Binkly had experience under the bright lights at the Pepsi Center having qualified a season ago, lost in the opening round to Lucas Tinnes with a 6-4 decision.

Facing off with Mullen’s Sebastian Campos, Larson took a 4-0 lead but allowed Campos to score on a pair of escapes to cut the lead to 4-2 with just over a minute remaining in the third period. A Campos take-down knotted the match at four-all but Larson scored on an escape of his own to take the match by a 5-4 final. Unfortunately for Larson, he was pinned by Jesus Diaz of Trinidad in the next round, ending the tournament for the Berthoud junior.

Five of the six Berthoud wrestlers who participated in the 2017 state tournament will return next season, as only Bailey will be lost to graduation.