Spartans expect victory on the mat 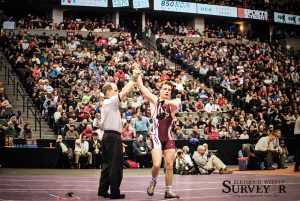 The Berthoud High School wrestling team is arguably the most consistently dominant and successful athletics program in the school’s history. And the 2015-16 season looks as though it will live up to the high standards that have been set over the last three-plus decades, as a number of wrestlers are in prime position to contend for the state championship.

The Spartans, who are ranked second to Valley in the Class 3A preseason rankings, return a number of highly-acclaimed wrestlers from last season. Led by a pair of seniors – Chad Ellis and Jimmy Fate – who won state titles last season and were both named to the All-State team, with Fate being named Wrestler of the Year after an undefeated 46-0 season, Berthoud Head Coach Scott Pickert believes his team is primed for a stellar year.

“We’ve got a really good senior leadership group this year,” Pickert said during practice on Dec. 1.

The long-tenured wrestling coach, himself a two-time state champion for BHS, also explained that while Berthoud returns some seasoned wrestlers – including 2014-15 state runner-up Matthew Bailey and state qualifiers Kyler Bailey, Devin Vise and Colin Leypold – the team will be further bolstered by some talented freshman. Pickert said, due the embarrassment of wrestling riches at BHS, he and his staff are still in the process of separating their varsity, junior-varsity and “C” team rosters.

Yet, as seniors who are both defending state champions, all eyes are on Ellis and Fate as the season begins. Both have added strength and weight since last season and thus will be wrestling in higher weight classes; Fate moves up to 160 pounds from 145s and Ellis from the 175-pound class in which he competed last season to 190s this year.

Fate, winner of 75 consecutive matches dating back to his sophomore season in 2013-14, competes for a BHS record third state title. Asked where he thinks Fate ranks in the annals of BHS wrestling, Pickert said he’s definitely one of the best.

“Both are super-talented,” Pickert said. “Jimmy is probably the first division-one wrestler to come out of Berthoud High that I know of.”

Two weeks ago Fate signed a national letter of intent to wrestle for the University of Northern Colorado in the Big 12 Conference.

Pickert explained there is no short-cut to success on the mat, and Fate’s already considerable accomplishments are the result of good, old-fashioned hard work. “He works hard, that’s what it is, it’s his work-ethic,” Pickert said. “He does all the extra work and that’s the difference; he’s just relentless at it.”

For his part, Fate explained that to win his third state title he will have to do precisely what his coach says – work hard.

Ellis, who before winning the state title as a junior last season had finished in third and fourth place, respectively, the previous two seasons, explained that being a defending champion and knowing he will get every opponent’s “A-game” each bout has not changed his approach.

“I feel like as a competitor, whether it’s wrestling or anything else, you’re just going to go out and give it your best shot,” Ellis said.

The senior explained his biggest challenge has been maintaining weight, but doing so in a way that keeps his body in top-notch shape. He said the added weight has not changed his technique on the mat but, “it definitely made getting in shape a lot harder, getting oxygen to every part of my body because I have a lot more weight to account for this year … I think a lot of the better big guys are the ones that can still wrestle like they could when they were smaller, so I definitely think that’s something I need to keep in my mind.”

While Bailey, Ellis, Fate and others will all work to win state championships in their individual weight classes, Berthoud has a real shot this year at taking home the team state title, which would be a first for the Spartans. Asked if he has put that forth as a goal for the team this year, Pickert demurred, but said, “We want every kid to be as successful as they can, and if that’s happening we feel we will be successful as a team.”