In what is has to be one of the greatest individual performances in the history of Berthoud High sports, on Tuesday senior swimmer Jamie Dellwardt brought home not one but two state championships. Dellwardt won the 3A crown in both the 100-yard backstroke and 200-yard freestyle races while also swimming the anchor legs on Berthoud’s 200-yard and 400-yard freestyle relay teams that finished in fourth and eighth places, respectively. 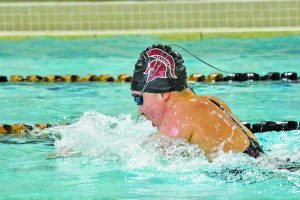 Photo by Angie Purdy – Berthoud High School Senior Jamie Dellwardt competing in a meet earlier this year. At Tuesday’s 3A state finals, Dellwardt won the state championship in both the 200-yard freestyle and 100-yard backstroke events.

Competing at such a high level is nothing new for Dellwardt, who last fall committed to swim collegiately at Northern Arizona, as she had brought home three medals, a silver and two bronze, from state as a sophomore and a junior the previous two years competing the 100-yard backstroke and 200-yard individual medley.

But this year was different. Despite winning the league championship in the 200-yard individual medley race, Dellwardt opted to compete in the 200-free race at state, where her season-best time entering state was 1:57.33.

“I chose 200 free over IM this year because I know my personal best time is faster than what I’ve been able to go so I want to show that I can go faster. I feel like there is the most room for improvement in that race,” Dellwardt said of her decision to forgo to 200 IM and race in the 200 free. “I’ve been swimming the 200 IM for such a long time and I still have club meets coming up where I will swim the IM so I wanted this chance to show what I can do in the 200 free.”

Dellwardt was joined by teammates Kysa Keck, Abby Dodd and Paige Bauer on the 200-free relay team that also saved their best for last, finishing the race in a season-best 1:43.74 to take fourth place at state. The same quartet raced in the 400-yard free relay and took a solid eighth place finish.

Keck and Dodd, both seniors who have been pillars of the Berthoud program since its inception three years ago, also turned in stellar performances in their final high school meet. Keck posted a season-best time of 0:57.10 to take 13th place in the 100-yard freestyle finals and 25.99 to 12th place in the 50-yard freestyle sprint race. Dodd swam on all three relay teams, helping bring home fourth and eighth place finishes in the two freestyle relays and swimming as part of the 200-yard individual medley team that included teammates Kelly Conlon, Avery Anderson and Natalie Major that finished 17th. Sophomore diver Abigail Wiggins claimed 18th place at state in the one-meter springboard finals, scoring 251.60 points.

Editors note: The Surveyor will have more extensive coverage on Dellwardt’s state championships in next week’s issue.