Spartans keep Fort Lupton out of the end zone 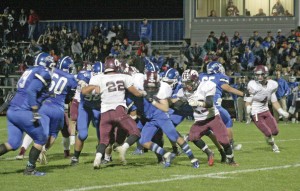 The legendary football coach Vince Lombardi once said, “Gentlemen, we will chase perfection and we will chase it relentlessly, knowing all the while we can never attain it. But along the way, we shall catch excellence.”

The mark of a champion is to strive for excellence in all aspects of the game, from Saturday through Thursday, so when the team takes the field on Friday it’s prepared to peak both mentally and physically. All week, leading up to the Fort Lupton Blue Devils game, the Berthoud High School Spartans head football coach Troy Diffendaffer and his staff extolled the importance of keeping up the intensity and execution in practice.

Early in the week’s practice offensive coordinator Mike Drake passionately reminded the players that winning a couple of games doesn’t mean anything in the big picture of the season. Everyone needs to practice with a sense of urgency and purpose because it will show up on Friday if not.

On Sept. 12, against the Blue Devils (0-3) the Spartans (3-0) walked away with a 42-0 win, but there was a sense that the players and the coaches felt the team could have played better and that they have much better football in them.

The Blue Devils were scrappy, representing Fort Lupton on their homecoming night. But the Spartans, even without playing their best, were simply too much for the home team.

Berthoud senior Micol Woodiel, one of the team captains for the evening had one of his finest games for the “maroon and white.” Woodiel scored a touchdown on the second drive of the game, three yards out on a read option pitch from junior quarterback Cody Braesch. Woodiel, in the third quarter, punched in a one-yard touchdown after a 68-yard run to set up the scoring play. Woodiel was also second on the team in tackles with five (two solo, three assists) and had a blocked punt.

The Spartans’ leading tackler, on a night when the defense secured another shut out for the Spartans, was junior Jimmy Fate who tallied 12 tackles (four solo, eight assists).

Fate understands that to achieve excellence, they have to relentlessly pursue it seven days a week.

“Our team is still learning what it takes to win; we have had a taste of what it feels like and each and every one of us is hungry for more,” said Fate. “Now it is up to all of us players to put in the effort and work every day at practice to get to the next level. Our true test will come when we face an opponent that punches us back and for us to come back and answer the bell.”

Twelve Berthoud defensive players had multiple tackles against Fort Lupton. This defense, which has three straight scoreless games, creates an environment of “if you are late to the ball carrier you’re going to miss out on the fun in bringing him down.”

Offensively, the evening’s second score came on a connection between Braesch and junior wide receiver Jackson Hall. Hall was pressed by the cornerback at the line of scrimmage and Braesch recognized this, expecting his wide out to beat the Blue Devils defender. The result was a 25-yard touchdown for the Spartans. Hall leads the state (3A) in touchdown receptions with five; all of them coming from Braesch.

The next touchdown was another 25-yard pass from Braesch, this time to junior Chad Ellis. Ellis, who had another standout game for the Spartans, split the defensive backfield on a nice route to help push the score to 20-0. Ellis, who is one of many dual offensive/defensive threats on the team, also had an interception and a fumble recovery on the defensive side of the ball.

Senior kicker Kurt Hucal kicked the extra point after the Ellis TD to make it 21-0. Hucal made all of his six extra points on this evening and is 16 for 17 in point-after attempts this season. Hucal lined up for a 40-yard three pointer and was on target but just short. As the team goes through the rest of the schedule and gets locked up in tighter games, consistency and good execution by special teams will be important.

One special teams highlight was on two kickoffs. Twice, sophomore Hank Graham fought off multiple blocks to make two tackles for the special teams. These plays are just as important as any defensive snap in securing a shut-out. If the 11 on the kickoff team let up for just one play, it can mean six points for the opponent and can swing a game’s momentum.

Another senior joining Woodiel and Hucal with performances of note was Matt Bonds, hauling in three receptions for 82 yards.

The Spartans came out of an extended halftime due to the homecoming festivities not looking like a team up 21-0. They knew they could play better and that in itself is a positive characteristic if you have a goal for excellence.

Second half scoring was started by Ben Poirior. The junior found space behind the Blue Devils’ cornerback and safety for a 37-yard catch and sprint along the Fort Lupton sideline for a touchdown. That was followed by Woodiel’s second TD. The scoring was capped off by Fate running over a Fort Lupton defender at the 5-yard line in classic Earl Campbell style to close out the Spartans’ point production from nine yards out.

As Coach Lombardi said about chasing and catching excellence, if these young Spartans embrace what it takes week to week to chase excellence, the reward for them and their football brothers will last a lifetime.