Mike Burkett is never one to set sights low. And with a Berthoud High School (BHS) golf team that will return several experienced players, the 2017 season is no different for the Spartans head coach. 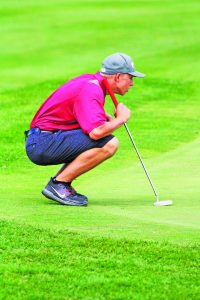 Jack Hummel analyzes his put during a 2016 tournament.

“Our goal is still to win the conference, send a team to state; we want to match what the (BHS) girls did in the spring, those are our primary goals,” Burkett said on Tuesday. “I would like to have (Jack) Hummel and the (Cameron and Evan) Poll boys be All-Conference players … that’s something I’d like to see and those three guys and this team are capable of it.”

Hummel, now a senior, was an All-Conference selection in the 2016 season, carding scores in the 70s in four of the five Tri-Valley Conference (TVC) tournaments in which he competed. The senior will be Berthoud’s No. 1 seed in the team’s competitive tournaments this upcoming season, a role Burkett explained Hummel both seeks and has embraced, saying, “Jack will be our one, I think he wants to be in that one spot, I think he can handle that one spot.”

Joining Hummel to form the core of Berthoud’s varsity roster in 2017 will be senior Evan Poll, who took a year off last season, and his younger brother, Cameron Poll, who competed and showed very well for Berthoud as a sophomore in 2016. Burkett expressed great confidence in his top three golfers saying, “There’s no reason why, in any of our league matches, that if one of them has a good day they couldn’t be at the top of the leaderboard.” Caleb Schumacher and Brandon Hoskins are the early front-runners to make up the final two spots on Berthoud’s varsity roster.

Burkett explained that, despite having turned in multiple strong performances as a team last season in conference matches, having come up short of a state berth, something the second-year coach said “sticks in my craw a little bit,” at regionals was a disappointment the team is eager to rectify this year. The do-or-die nature of the regional tournament, which determines which golfers and teams go on to state regardless of season performance, is one the team will embrace for the challenge it is.

Considering the lineup of courses on which the Tri-Valley Conference (TVC) teams will compete this season, Burkett said the team will focus heavily on shots from 150 yards and in. “Our short game has to be good, it has to be our best aspect,” Burkett said. “If you can play within 150 in you can score at any of these courses we’re playing this year.” The Spartans will practice frequently at Cattail Creek Golf Course, a par-three course where players are rarely tasked with taking any club bigger than seven-iron out of their bags.

Burkett hopes, by focusing on short game, his golfers can put themselves in range to score birdies, pars and bogeys and eliminate posting a big number on their scorecards, Berthoud can shave valuable stokes off their team score in each tournament. Acknowledging most of his players have individual swing coaches they work with throughout the year, Burkett said his focus is on honing the golfers’ individual mentalities.

Berthoud will play their first match of the 2017 season at the Northeastern 18 course in Sterling on Aug. 10. The Spartans will return to the Front Range for a TVC meet at Saddleback Golf Course in Firestone on Aug. 14.