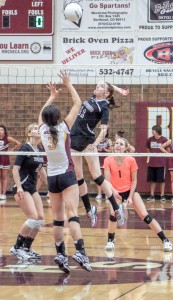 Jessa Megenhardt, left, and Haley Hummel, left, focus on Madi “Mad Dog” White as she goes after a kill against Windsor on Oct. 14 in the final home match of the season. Paula Megenhardt / The Surveyor

Seniors Hannah Atkinson, Alyssa Peacock and Madi White were honored at the last home volleyball match on Oct. 14. Teammates Haley Hummel, Shaylee Pierick and Jessa Megenhardt spoke about how they couldn’t image the team without them followed by tearful hugs before beginning the match. The Lady Spartans had a joyful ending to the night with a sweep over the Windsor Wizards, 25-18, 25-20, and 25-23.

Having swept Windsor in three sets earlier in the season, the Spartans were confident and relaxed on the court. The first two sets Berthoud held the lead the majority of the time, with Hummel, Peacock and Atkinson covering the floor and setter Megenhardt moving the ball around to all the hitters.

The third set became a near-nail biter when the Wizards had a five-point run, putting them up 21-19. With Berthoud still down at 20-23, the Spartans buckled down and had their own five-point run to win the set and the match.

“I think we’re a lot more mentally strong than we have been in the past,” White said. “We wanted to finish it in three. We’ve got cake now, so of course we wanted it in three.”

Freshman hitter, Julie Ward, stepped up her hitting, finding the top of the ball and putting it down, although the kills were spread between all six hitters. Atkinson had 11 kills, 16 digs and an ace serve. Ward had 10 kills, 15 digs, and three ace serves; White had eight kills, two blocks and one ace; Peacock had seven kills and 17 digs; Pierick had three kills and one block; and Megenhardt had three kills, 39 assists, 17 digs and one ace on the evening.

“It was quite a game, in the usual manner of Berthoud play,” Atkinson said. “We like to make it interesting in the end. I was glad we could make it happen in the last few points.

“I’m super excited about Regionals. I think if we play at the caliber that we can, we can make it to State, too,” said Atkinson.

The team gathered for the celebration to honor the seniors following the match and had their cake and ate it, too.

The last volleyball match of the season is Oct. 16 at Holy Family High School in Broomfield at 6:30 p.m. 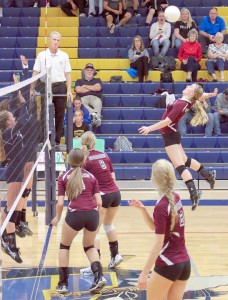 Spartans teammates cover the court as right side hitter Julie Ward goes up for the kill against Frederick on Oct. 9.
Paula Megenhardt / The Surveyor

Berthoud traveled to Frederick Oct. 9 and swept the Warriors during their homecoming week, 25-23, 25-21, 25-21. The Spartans got the job done, holding second place in the Tri-Valley Conference at 10-2.

“I wanted a little more energy,” said head coach Daisha Agho. “Last year playing here wasn’t our best experience and, I think, that was in the back of their minds, up through the first game anyway. After that, they got back into their groove.”

It wasn’t an easy win for the Spartans. Frederick answered powerful hits from Berthoud with powerful blocks. The Warriors found open spots on the court and took advantage of the Spartans’ lack of coverage. But when it came time to put on the heat and pull out a win, Berthoud was up to the task.

In the first set, the teams were tied at 22 apiece when Frederick called a timeout. The Spartans were undaunted. Frederick took only one of the next four points. Berthoud middles Madi White and Shaylee Pierick both scored on blocks, and Hannah Atkinson killed it, to finish the set at 25-23.

The first win was definitely a bonus, said Agho.

“Overall, they were a little flat, but still pleased with the result,” she said. “Timing was a little bit off with Julie (Ward), but she’s still being aggressive. As a freshman, that’s something I need from her, to not lose confidence in herself.”

The next two sets the Spartans kept the Warriors at bay, never allowing them to gain the lead, with the exception of the beginning of the third set when the score was 2-0, Frederick. Berthoud stayed focused, although White felt they could have put forth a stronger effort.

“We didn’t play our best,” White said. “I think they just made more mistakes than we did.”