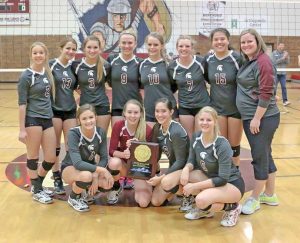 The Berthoud Volleyball team poses for a photo after winning the Class 4A Region 11 tournament and punching their ticket to the state tournament in Denver, starting Nov. 13 at the Denver Coliseum.
Paula Megenhardt / The Surveyor

They say those things worth having are worth fighting for. To win their second consecutive regional championship and make a return to trip to state, the Berthoud High School (BHS) volleyball team really, really had to fight.

Berthoud served as the host team for region 11 and welcomed Fort Morgan and Thomas Jefferson High Schools to the BHS gym on Nov. 7. After quickly dispatching Fort Morgan in three sets (25-13, 25-11, 25-17), the Lady Spartans of Berthoud faced off with the Lady Spartans of Thomas Jefferson in what was one of the most exhilarating matches of the season.

Berthoud ended up on top, in straight sets, 25-19, 25-20, 27-25, and in so doing punched their ticket to state. According to Berthoud Head Coach Daisha Agho, it was the little things that tipped the scales in her team’s favor.

“It was our discipline,” Agho said when asked what made the difference in the game. “We tried to play relaxed a little bit more and that definitely showed in the second and third games.”

The old adage that volleyball is a game of runs, where one team can score a rush of points – as Berthoud did early in the first game with Thomas Jefferson, scoring nine-straight to take an early 10-2 lead – before a side-out allows the other side to answer, was challenged in the second and third sets.

After Berthoud’s aforementioned nine-straight points early in game one, four was the most consecutive points either team would score for the remainder of the match. The back-and-forth nature is something of an uncommon occurrence in volleyball, and it forced each team to play as error-free as possible and remain cohesive.

The latter, it appeared, was something Thomas Jefferson was unable to do. As the two teams began trading points in a one-for-one sequence in the third game, the visitors began to crack under the pressure while Berthoud remained united.

“They were starting to fight with each other on the court and my team was sticking together. You’ve got to stick together as a team,” Agho said after the match.

“We just had the confidence, on their side of the net they started fighting with each other and on our side we stayed strong as a team and pushed through it,” added setter Jessa Megenhardt.

Megenhardt’s play on the afternoon was nothing short of phenomenal; the junior was all over the court and tallied three aces, three blocks and six kills in the match with Thomas Jefferson. Yet it was things that do not show up on the stat sheet – her savvy and court awareness – that time and again allowed Megenhardt to put her teammates in positions to score.

“She runs our court very well. She knows offensively where we’re going to put the ball and who the best option is in that specific rotation,” Agho said of Megenhardt. “Her court sense is amazing; she can actually see the other side’s defense with her peripheral vision. She’s very, very smart and well beyond high school play right now.”

Thomas Jefferson’s front row featured several players taller than what Berthoud has been accustomed to facing this season, including 6’6” junior outside Jaden Sandoval, and their ability to block Berthoud attacks required the hometown Lady Spartans to plan their attacks carefully, and that is where Megenhardt really shined.

“We really had to watch [Sandoval] and just see where she went,” Megenhardt said. “If she was in the middle or on the outside, and where all the rest of them went, and find where our hitters had the best matchup they could get and just put it away.”

Late in the third set, Sandoval recorded a kill to give Thomas Jefferson a 24-23 lead. Megenhardt then set up Braesch on the right side of the net where the junior’s attack found the floor in the very middle of the defense, knotting the score at 24. Berthoud, after a serving error gave Thomas Jefferson a 25-24 lead, the visitors were unable to return an attack by Pierick, re-tying the score at 25. A block on the right side by Sarah Howard prevented Thomas Jefferson’s last real attempt to score and was followed a pair of unforced errors that gave Berthoud the 27-25 victory.

“We really worked a lot on our middles last week, on really getting our timing down, because once you get the middles down it really helps,” Megenhardt said. “Once your middles are involved your outsides have a better chance at scoring.”

Berthoud (16-9, 9-5 conf.) earned the 10-seed in the 12-team state playoff bracket. The Lady Spartans bracket also consists of six-seed Longmont (21-4, 12-1 conf.) and three-seed Ponderosa (18-7, 9-1 conf.). All three teams will play one another beginning on Nov. 13 at the Denver Coliseum. One team from each of the four pools will advance to the state semi-finals which begin in the afternoon on Nov. 14.