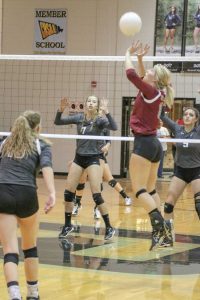 Berthoud’s Jessa Megenhardt sets the ball during the match against Roosevelt in Johnstown on Tuesday. The Spartans won the contest 3-0.
Paula Megenhardt / The Surveyor

“Our persistence paid off … we just didn’t give up,” said Berthoud High School (BHS) volleyball player Jessa Megenhardt after the Lady Spartans’ 3-0 (25-23, 28-26, 25-19) win in a raucous environment on the road at Roosevelt.

Despite the sweep, it was anything but an easy win for Berthoud as the host team held sizable leads at times throughout the match. The host team gave Berthoud fits, disrupting the Lady Spartans’ attack with their front line and assembled scoring rallies  against an, at times, flat-footed Berthoud defense.

Yet the Lady Spartans’ tenacity, resiliency and, in Megenhardt’s words, persistence, won the day in each and every set. Throughout the match, whatever it was that Roosevelt was doing well or Berthoud was doing poorly, the latter was quicker to adapt and adjust and thus come out on top each time.

While Roosevelt held leads of 20-14, 13-8 and 7-3 in the first three sets, Berthoud battled back to win each set. A block of a Roosevelt attack by Berthoud’s Julie Ward and Casady Berry scored the clinching point in the first set. A Megenhardt kill and a ball-handling error gave the Lady Spartans the two points needed to get the 28-26 win in the second set and back-to-back kills from senior Shay Pierick marked the last two points in Berthoud’s match-winning third set.

After battling through some struggles with their serve-receive and overcoming the Roosevelt block in the first two sets, Berthoud was crisper and more disciplined in the third. The Lady Spartans adjusted and scored 13 of the third set’s final 18 points to clinch the match.

In the first two sets, Roosevelt took advantage of a lack of communication by the Berthoud defense; a kill by Berthoud’s Kailey Berry ended the host’s six-point rally in the first set, a rally that came about largely as a result of a slow-to-react Berthoud defense.

“It is an experience thing, last year our serve-receive had been there for four years together so we really don’t have a consistent back row compared to what we’ve had the last two seasons,” Agho said.  “But new is not an excuse, we need to be crisper, we worked on it in practice yesterday and guess what we’re doing tomorrow?”

In the second set, the Lady Spartans shored-up their defense but trailed by as much as five in two separate points, 13-8 and 18-13, as Roosevelt proved able to block attacks. When Megenhardt would serve to Ward and Kailey Berry, the Lady ‘Riders block countered and tapped the ball back onto Berthoud’s side of the net for a score.

“Our coverage should have been there, we’re not talking, we still have to back [Ward] up, she’s not going to get blocked most times but when she does we need to pick her up, every team we play is going to hone-in her, she’s so stinking good,” Agho said.

With Roosevelt holding a 24-21 lead and serving for match point, Pierick and Abi Lutz blocked their attack for the side out. Two kills from Megenhardt and one from Ward that was setup by a diving dig from freshman Trinity Penny put Berthoud in front 25-24, it was their first since being ahead 3-2 very early in the set. After a Roosevelt ace put the hosts up 26-25, the Lady Spartans scored three-straight on kills Ward and Megenhardt and a Roosevelt error.

Roosevelt had one gasp in the third set, taking an early 7-3 lead but Berthoud’s persistence was once able to overcome the early deficit and win the final set comfortably to complete the sweep. Berthoud steadily came back and eventually pulled ahead, scoring nine of set’s final 12 points to clinch their seventh win of the year.

“We started using our middles a lot more in the last set and also utilizing our right side Abi [Lutz] but, honestly, it was a lot of persistence on the swing and just keeping at them, Megenhardt said. “After a while if you keep swinging at them, something has got to give.”

Ward finished the night with 15 kills and Kailey Berry tallied 13. Megenhardt contributed 44 assists and in recording 11 was one of four Lady Spartans along with Ward (18), Sarah Howard (14) and Casady Berry (11) to hit double digits in digs.

“Our mentality was we have to play a lot of defense and swing a lot because we knew this team was one of the best teams defensively in our league,” Megenhardt explained. “So we just had to make sure we were making smart plays on our swing and stay with it.”

Mead’s stellar court coverage prevented Berthoud from assembling any kind of scoring rally. It was not until the third set, the only one that was won by Berthoud, where the Lady Spartans scored more than two points in any rally. The visiting Lady Mavericks, however, were able to string-together multiple three-, four- and five-point rallies throughout the first two sets.

In the third set, Berthoud had scoring rallies of six, four and five points as they had total control of a set they won comfortably 25-16. The fourth and final set was very back-and-forth with the teams trading scoring rallies in one- and two-point increments. Berthoud eventually clawed their way to a 20-17 lead as Kailey Berry turned in what was arguably her best match of the season. Minutes later, the Lady Spartans were able to take a narrow 25-24 lead but Mead battled and scored five of the set’s final seven points to hand Berthoud their first TVC loss of the season.

Kailey Berry led Berthoud 13 kills and Ward notched 12 against a very tough Mead block. Pierick recorded three aces and three blocks on the evening while Megenhardt paced Berthoud in both digs (24) and assists (30).