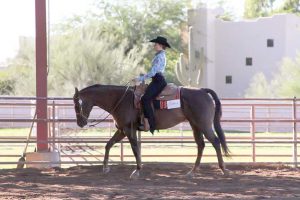 Equestrian may not be on ESPN often, however its roots date back farther than most sports and teams we generally root for on an average week. This year, 24 Berthoud High School students are participating in that same sport, which dates back to approximately 3500 BC.

The equestrian club was formed last spring after long-time Berthoud residents and horse-lovers Tamara TerAvest and Jan Guynn pursued BHS principal Chris Garcia about the idea. The two mothers of children within the Berthoud school system found Garcia to be more than supportive and received an impressive turnout of interested students, something Guynn attributes to being “really long overdo” within the Berthoud community.

“There are so many kids in the community who are not into football or soccer,” she expanded. “I think it is important to understand a lot of students are embedded into the agricultural side of things as well.”

“The club is for anyone interested in horses and horse activities,” TerAvest explained. “You don’t have to participate in Interscholastic Equestrian Association (IEA) sanctioned events. Members come here for a basic course [in horse riding] to the opportunity to compete in college. Others want to learn proper horse care and training.”

The IEA is a non-profit sanctioned riders’ committee with over 11,000 members in 42 states across North America. Students in grades 6-12 may participate in local and national shows in two disciplines: “Hunt Seat (or English)” and “Western.”

While it’s easy to get into the finer details of the differences between the two disciplines, for those new to the sport, “Western” and “English” are primarily divided by the type of saddle – with Western being larger and heavier and English smaller and lighter. Another unique aspect of IEA-sanctioned events is that the horse is drawn for the rider; the rider is not allowed to provide his or her own horse or tack, thus making every show a little bit different for the contestants, with a judging focus based upon horsemanship and equitation.

Elana TerAvest and Haley Fischer compete in both the English and Western disciplines. Elana – who also participated on the high school volleyball team, yet considers equestrian her first love ‒ began riding at age 6, while Haley is not far behind starting her equitation career at age 8. Haley’s favorite part of the club is meeting new people and the challenge of riding unfamiliar horses.

“Riding horses that you have never met before challenges you to be the best rider you can be,” Haley said. 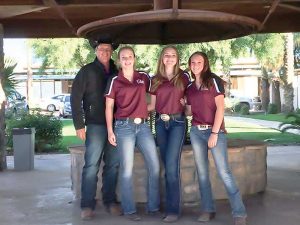 Meanwhile, Elana appreciates the camaraderie of the team and working with the coaches.

The team has found the Guynn Training Center (just outside Berthoud) to be a home away from home. The training facility is owned by Jan and husband Mark, who also serves as one of the club’s trainers along with Molly Brame.

“We are so lucky to have the caliber of coaches we have,” Tamara TerAvest said. “Mark is an exceptional trainer and judge. Molly, on the other side, is a great trainer.”

Elana added: “The one thing that sticks out most [the trainer’s have taught me] is perseverance, never giving up; you’ve got to brush off the dirt and climb back on, always.”

Fischer – who plans to become a horse trainer or an equine vet after high school – expanded on the experience, saying, “Mark and Molly have taught me that equitation is the most important part when it comes to riding a horse. It keeps you safe and it is important when you are training a horse.”

Training for IEA events is demanding, with a required 100 hours of practice in addition to three shows a year, yet comes with the opportunity for scholarships, something Elana plans to take advantage of, as she would like to compete in college.

“The team is so horse-crazed,” Tamara added. “It is fun to watch because they are a club of kids who just want to learn about horse riding and the nature of it.”

And, while the club has yet to be fully recognized by the school district as a sanctioned sport, make no mistake; Guynn envisions the day in the hopeful not-to-distant-future where the girls on the team can wear “Spartans” proudly on their backs, too.

“I would like to come back one day and see members of the equestrian team in the Berthoud Sports Hall of Fame,” Guynn said.

For more information about the sport of equestrian, visit rideIEA.org. And for additional information on the Guynn Training Center or the Berthoud Equestrian Club, please visit guynntraining.com.