The Dead Sea Scrolls are a magnificent ancient archeological find, of which 16 people from our community were privileged to see Saturday, April 28. These fragments of scripture, from a community far from our own and long deceased, are currently on display at the Museum of Nature and Science in Denver. The exhibit is so popular it was sold out on the day we visited. Fortunately we had made a reservation for our group.

We began in the parking lot of the United Methodist Church of Berthoud at 8:30 a.m. with a reminder that when we were on pilgrimage we embrace God, knowing we will meet Him in the places we go and in what we see.  We were also reminded to let go of our expectations, because on pilgrimage you never know what may happen.  After a prayer the group divided into four vehicles to begin the one-hour drive to the museum. 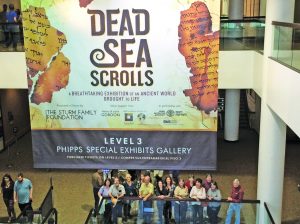 The exhibit began with an audio-visual experience of the Dead Sea and the caves at Qumran, along with a beautiful presentation by the museum representative of the story of how the Dead Sea Scrolls were found by a Bedouin goat herder in 1947. Next, a timeline depicting the rise and fall of civilizations in Israel, from our time backward toward the time of the writing of the scrolls, which were uncovered in the caves of Qumran, led to the inner exhibit. The importance of archeological aspects, such as a Tel, or ancient city covered over by other civilizations, and what it takes to preserve ancient parchment documents, were emphasized several times on the way to the main event. We also learned about the homes of the era; they usually consisted of four rooms, with the domestic animals living in the main room, or court area, amongst the residents. In addition, there were videos about the Masada and The Western Wall, displays of ancient pottery found throughout the area, large photos of Jerusalem to enrich the experience, and an actual building stone, almost a yard square, from the second Temple Wall.

In the main exhibit the Dead Sea scroll fragments were displayed in the middle of a large room, under glass.  Translations of the passages found from Psalms, Isaiah, Enoch, and the community’s Book of Discipline were included as well. It was delightful to see everyone’s faces as they looked at these ancient Biblical writings up close and personal. The information presented was that these are the oldest fragments of scriptural manuscripts available. All of the scrolls belong to the state of Israel, and they are on display both in traveling exhibits like this and also at the Israel Museum in Jerusalem.

Some of our group stayed behind to linger, while others continued to a culturally-inspired lunch at the Jerusalem Restaurant in Denver. Jerusalem Restaurant boasts of its “big robust flavors of the Mediterranean and Middle Eastern regions” and it did not disappoint. The casual, laid-back atmosphere of this small, quaint restaurant made us feel right at home. There were several tantalizing menu items to choose from, including various pita and gyro sandwiches, stuffed chicken, lamb and beef sirloin entrees. Our group enjoyed the sandwiches, as our time at the restaurant was limited – we were headed to the next part of our pilgrimage.

Next on the journey was meeting back at the museum to view the IMAX movie, “Jerusalem.” This final experience, shown in 3D, was the perfect ending to our pilgrimage. The 45-minute movie follows three young women, one each of Jewish, Christian and Muslim faith, who express their love of Jerusalem and their heritage.  The beautiful sights and sounds of this Holy City were palpable as we were taken on a tour of the streets, buildings, landscape and customs of the people who make Jerusalem so special.

One person described it well as an introductory experience. She also shared the trip made her want to go to Israel and experience Jerusalem in person. In conclusion, it was a great day of spiritual growth, fellowship and learning.