Berthoud author Megan E. Freeman couldn’t get the idea out of her mind of a middle schooler being left entirely alone in a Colorado community just like hers.

So she created 12-year-old Maddie and a Rottweiler named George for her debut middle grade novel, “Alone,” published Jan. 12 by Simon & Schuster/Aladdin.

“I think it’s really compelling about the idea of being the only person left somewhere,” said Freeman, a Pushcart Prize-nominated poet who writes middle grade and young adult fiction. “What would you do if you were in Maddie’s situation? Could you survive alone?”

“Alone” is a novel-in-verse that tells Maddie’s survivalist story of waking up from a secret sleepover and finding her small Colorado town mysteriously evacuated and abandoned. Without access to any modern conveniences like power, the internet and working phone lines, Maddie has to learn how to survive on her own. She escapes fires, floods, storms, looters and wild animals and faces extreme loneliness with her only companions being books and her dog.

Freeman found inspiration for Maddie’s story from Scott O’Dell’s classic historical fiction novel, “Island of the Blue Dolphins,” published in 1960, about a girl named Karana who’s left behind on an island after her tribe is evacuated. Freeman had read the novel in her Mother-Daughter Book Club, where members said how incredible it was for Karana to survive. Freeman mentioned that the island was also the girl’s home, but then began contemplating the idea of a contemporary retelling of the story but set in a small Front Range town.

Maddie has “power and autonomy,” but also responsibility and fear and a deep vulnerability, Freeman said, adding that children like the concept of being the only one around, not having to check in with their parents. But at the same time, they would have to take care of themselves and find the resources to solve their problems, she said.

“Children are fascinated by the survival elements of it and the psychological and emotional toll that loneliness takes,” Freeman said.

Twelve-year-old Lucia Brown of the Boulder area was “super excited” when Freeman’s book came out and rushed to buy it at the bookstore, she said.

“I didn’t want to put it down. It was a great page-turning book,” Lucia said, adding that typically she doesn’t like survival books but could identify with the character. “It was compelling to me because there was a girl my age and she had to go through all these things. I felt like I was there with her throughout the book. … All these bad things happen and she has to survive them. You want to figure out what happens at the end.”

Eleven-year-old Zoe Gannett-Mathews of Lafayette liked how Freeman’s book inspired her to think of things she hadn’t thought of before, such as using wine to flush the toilet.

“Another thing that I realized I have always taken for granted is heat. Maggie had to transfer from her mom’s house to her dad’s house because her dad’s house had a wood fire, which made having heat possible,” Gannett-Mathews said. “I read this book in one day and simply could not put it down. I loved how it was a modern-day ‘Island of the Blue Dolphins.’”

Freeeman based her fictional town on parts of the northern Front Range and George on a dog she knew several years ago; plus, the books and authors she mentions are some of her favorites. 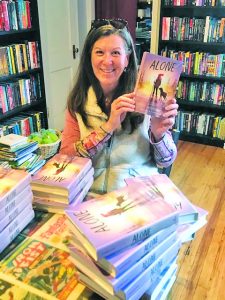 “Readers in Colorado, especially on the northern Front Range, are going to recognize places in the novel even though I fictionalized everything,” Freeman said.

Before finding a publisher, Freeman spent eight years writing her book. She needed to figure out the best way to tell Maddie’s story, starting with prose and a third-person voice, then revising it into verse and a first-person voice. She found since Maddie’s experience was internal and she couldn’t engage in dialog that verse worked better, she said.

“The poetry allowed me to be more intimate with her interior experience,” Freeman said.

Novels-in-verse consist of a series of poems that tell a story and follow the elements of a traditional novel, Freeman said.

“The fact it’s in verse, there’s more white space. It’s visually a lot less overwhelming,” Freeman said. “The cover is beautiful, the idea is compelling, and the actual act of reading is not as overwhelming as it might be for some readers.”

Freeman also wrote “Lessons on Sleeping Alone,” a poetry chapbook published in 2015 by Liquid Light Press, and has her work published in literary journals, anthologies and educational publications. She has a young adult novel on submission about a girl who tries to save her teacher from being fired and is revising a middle grade novel about a boy on a small cattle ranch in south Texas. Both are written in prose form.

Writing is a way for Freeman to play with and experiment with ideas, she said.

“For me, it’s about processing my own experiences in the world, but it’s also about connecting with other people,” Freeman said.

Freeman gained a love of writing and reading through the inspiration of her elementary school teachers and of poetry when poets visited her classroom every week at her school in Los Angeles, Calif. To continue that inspiration, Freeman holds Zoom meetings with students in the St. Vrain Valley and Boulder Valley school districts and with schools nationwide to talk about “Alone” and her experiences as a published author. She also leaves signed first editions of her book in Little Free Libraries in Berthoud.

Freeman has 30 years of classroom experience—she taught arts and humanities for 24 years in Lafayette schools and another six years in Ohio and California. She also offers workshops and speaking engagements nationwide. She earned a Bachelor of Arts degree in theater from Occidental College and a Master of Fine Arts degree in acting from Ohio State University.

Freeman likes to travel, and wherever she goes, she hunts down a local bookstore and buys at least two books to show her support for locally owned retailers. So far, she’s visited more than 50 bookstores worldwide. She offers her book at local bookstores in Longmont, Boulder and Larimer County, as well as online, including through her website, meganefreeman.com.