Spartans take to the mat in annual Soeby Classic

Wrestling in their annual namesake tournament – the Soeby Spartan Classic – the Berthoud High School wrestling team saw a number of grapplers turn in strong performances. As a team the Spartans came up short in three of their four duals, losing to Loveland 45-33, to Skyline 42-33 and to 33-28, but bested Weld Central 35-34. 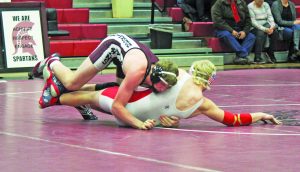 Photo by Christine Torres – Berthoud’s Wyatt Larson takes down Skyline’s Ricky Waters in the 170-pound class at the Soeby Spartan Classic this past Saturday. Larson won the match impressively with a pin in just 54 seconds.

Earlier in the season the Spartans strength came in their lower weight classes, yet, as the season has progressed, wrestlers in the heavier weights have begun to hold their own, and this past Saturday at Soeby is a prime example. Wyatt Larson (170 pounds), Anthony Trojan (182) and Brock Johnson (195) all picked up multiple wins for Berthoud, with Larson and Johnson joining Kyle Conlon (145) and L.T. Torres (120) in going a perfect four-for-four in their respective bouts.

Torres won a 6-1 decision over Issac Lujan of Loveland in his opening match of the day and followed that up with wins over Matthew Villareal of Weld Central, 5-0 decision and finally a close 2-1 victory to close out his afternoon with four wins. Conlon turned in an impressive performance on the afternoon, winning with a pair of pins over his opponents from Skyline (2:25) and Loveland (3:29) to go with two decision victories, 8-2 over Braden Baumgartner of Weld Central and 11-2 over his opponent from Glenwood to round out his day, also a perfect a 4-0.

Johnson has come back from a serious knee injury in stellar form, taking a forfeit and winning with three pints in his other matches at Soeby. Johnson pinned Scott Teesdale of Loveland in 1:54, Weld Central’s Dakota Tingle in 1:27 and finally, in just 34 seconds, against his opponent from Skyline. Larson took care of business in each of his four bouts. The senior pinned Marshall Wolfe in 2:18 to begin the day and followed that up with a 3-1 decision victory over Weld Central’s Quentin Jiner, a victory via fall in just 54 seconds and an 11-4 decision. In 182s, Trojahn picked up a pair of victories with pins in 1:26 and 1:30.

Berthoud will host Holy Family for league dual on Thursday in what will be their final home mat meet of the season before traveling to Valley for the Viking Invitational on Saturday. Berthoud’s final regular season dual comes on Feb. 1 with a trip to Mead as a final tune-up before Regionals.