Hall of Fame dinner and awards embraced community, past and present 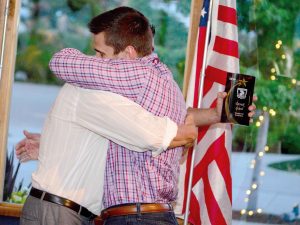 Berthoud High School’s track and field coach Colby Schultz hugs 2014 Berthoud Sports Hall of Fame inductee Derek Good as Schultz presented Good with his award. The HOF inducted eight people into the inaugural class at the award and dinner presentation on Thursday, May 29 at Brookside Gardens.
John Gardner/ the Surveyor

Even though Derek Good only lived in Berthoud for the four years he attended Berthoud High School (BHS), he considers the Berthoud community his family.

So it was no surprise for those who know Good that he became a little emotional while accepting his Berthoud Sports Hall of Fame Award at the inaugural event on May 29 at Brookside Gardens.

“It really reaches to my heart,” Good said. “It affects me emotionally, knowing that I have a family here in the community.”

Each of the inductees said that it was humbling and an honor to be included in the inaugural event.

“I’m truly honored and humbled by this experience,” said longtime coach and educator at BHS, Mathena. “I’m just a guy doing what I love doing.”

“It’s a great honor for me,” Good said. “It’s one of those things where you really know what a community thinks about you when you get an honor like this.”

For others, like Shoemaker, the recognition highlighted the things she learned growing up in Berthoud and through playing sports.

“It means everything to me,” Shoemaker said, “because this is my roots; this is where it all started.”

While the ceremony focused on athletic accomplishment, Pickert touched on a broader message, telling the audience that, although his athletic career was fun and fulfilling, coaching has been the highlight.

“Even though not all of them become champions, I’ve realized, later in my career, that championships aren’t important; they’re fun, but to watch these young men go out and become great husbands, community members, and just awesome people is what is the best part of coaching,” Picker said.

Peterson, who was humbled by the award, told the audience that while athletics played an important role in shaping who she is, they do not define who she is.

Carron and Landeros were absent from the event due to a previously planned trip to Jamaica. However, Bruce Carron, Tyler’s dad, and Jairo Landeros, Nikko’s dad, accepted the awards for their sons. 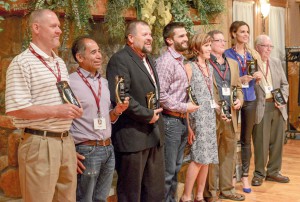 The group of inductees pose for a photo with their awards after the inaugural Berthoud Sports Hall of Fame dinner and awards ceremony on May 29, 2014.
John Gardner/ the Surveyor

“I tried to get Nikko to switch tickets with me but [Nikko] said, ‘no,’” Jairo said.

The induction dinner and ceremony consisted of recognition of these eight individuals associated with Berthoud and athletics, but also recognized the efforts of the 40 Berthoud Surveyor Athletes of the Week that were selected throughout the school year, coaches and parents of student athletes.

BHS graduates Kendal Baker and Preston Pickert received special recognition and were awarded the first ever Steve Fraser Memorial Scholarships for their athletic accomplishments as well.

The Hall of Fame was established to recognize excellence in sports and athletics by individuals from­ – and associated with – Berthoud.

Hall, too, said that the recognition of these individuals reaches far beyond the playing field into who they are in life.

“We know you’re proud and humbled to be part of this,” Hall said. “But, we’re proud of you being in this honorary class.”

While receiving the award was special for each of the inductees, each for their own reason, the community’s embrace will never be forgotten.

“I will always consider this home, and not being in town for 10 years, it still feels like home.” Shoemaker said.