Momentum is a key to success in any sport and it is a huge part to winning important games. When a team has momentum on their side, they cannot be stopped. 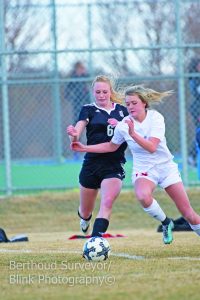 Photo by Lance Elmore, Blink Photography – Berthouds Hailey Pepper (left) fights for possession of the ball in a match against Loveland last week. The lady Spartans are off to a red-hot start to this season.

The Berthoud High School (BHS) girls soccer team is the perfect example of success from momentum. The Spartans have won their last three games and are on track to keep winning. The team has been on a roll through their non-conference schedule.

Last Thursday, March 22, Berthoud traveled to Fort Lupton for a 6pm kickoff. The Spartans looked to bounce back from a loss to Loveland and get momentum back on their side and they did just that.

Sophomore Maddie Barcewski led the team in goals, completing her second three-goal hat-trick of the season. But she was not the only one with a strong offensive performance. Sophomores Taytlin Harringfeld and Hailey Pepper each had two goals and Daria Degnan had one.

A complete team performance pushed the Spartans to their third win of the season. Coach Kelly Hardegree-Ullman said, “It was a beautiful night for a game. The first half started off slow, but the girls picked it up and found their stride.”

BHS had gotten some rhythm back and the team was ready to take on district rival, Mountain View. The game started off slowly with no score through 15 minutes of play. A cross into the box from freshman, Bree Fowler, to Barcewski gave the Spartans the first goal of the game.

“It all came from our heads and a lot of teamwork,” Barcewski said about starting the game off strongly. “We fed energy off of one another, we focused on finesse.”

Both teams’ defenses held tight through the rest of the half, giving the Spartans a one-goal lead heading into the last 40 minutes of play. After just three minutes, the Mountain Lions scored a goal and it was a tie game.

The Spartans fired back quickly with their second goal of the game coming from sophomore Ashley Hiatt after the assist from Degnan. The Lady Spartans had momentum back in their hands and used it in their favor right away.

Mountain View made one last goal late in the game to try to put the game in their favor, but their offensive push was not enough to outmatch Berthoud’s defense. The game was a good showing of the Spartans’ teamwork and work ethic.

“I think we connected a lot more and made a lot more passes. In the first half, it was kind of rough but we solidified our defense especially with our center,” said assistant coach Abby Widrig.

With momentum rolling into Monday night’s game, BHS was ready to get their fifth win of the season when they travelled to Campion Academy. The team was ready to jump out early, wanting to score right away.

In the first eight minutes of play, the Spartans already had a three-goal lead over the Cougars. All the players had some rhythm and used it in the remainder of the first half, scoring three more goals.

With a huge lead at halftime, the Spartans knew they had the advantage going into the next half, but were not ready to let up. BHS scored two more goals, along with shutting out Campion in the last 40 minutes.

Berthoud’s goals were scored by six athletes, and three had assists in the game. Maddie Barcewski recorded her third hat-trick of the season, and sophomore, Lily Degnan, scored her first career goal.

The Spartans have used momentum in their favor, giving them their best start to a season in over 10 years. Berthoud looks to continue their stellar start when they face Thompson Valley on Thursday, March 29 at 6pm at Max Marr field.