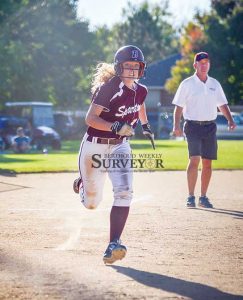 Berthoud’s Tristan Pope races to cross home plate to score the Spartans’ second
run of the game versus Erie on Sept. 27. Despite the 10-2 loss, the Spartans remain in good shape with a 10-6 overall (7-4 conf.) record so far this season.
John Gardner / The Surveyor

Games often serve as measuring sticks, providing teams with a chance to gauge where they stand relative to the rest of their league. In their last two games, the Berthoud High School (BHS) softball team hosted the first- and last-place teams in the Tri-Valley Conference (TVC).

Berthoud handled winless TVC cellar-dweller Skyline with ease, winning a 15-0 mercy-rule-shortened game on Sept. 22, but then fell by a 10-2 final to undefeated and state No. 1- (4A) ranked Erie on Tuesday.

Much as they had done just 10 days prior, Berthoud was highly-competitive throughout the game with the top-ranked Lady Tigers. Erie’s seven-run seventh inning provided the crooked final score in what was an otherwise closely-contested game.

“For 13 innings this year we were right there with the best team in the state,” Berthoud Head Coach Buddy Kouns said after the game. Erie pitcher Rio Sanchez allowed only a single earned run and fanned 13 Lady Spartans in seven innings of work inside the circle while also hitting a pair of two-run homers that helped the Lady Tigers improve to 16-0 on the season.

Kouns maintained Sanchez was not locating her pitches as well as he has seen in the past, but in too many instances his Lady Spartans failed to take advantage.

“When she was throwing strikes, they were right in the middle of the plate and we just didn’t jump on those,” Kouns said.

Berthoud stranded eight runners on the afternoon with half of them failing to advance beyond first base.

Four of Erie’s first five batters reached base to lead off the game, but pitcher Sarah Jorissen and the Berthoud infield worked out of the jam without allowing a single run. Third baseman Ashlynn Balliet showcased some gold glove defense when she fielded a sharp grounder hit her way by Maddie Foster, tagged third base to get a force out and then threw across the diamond to get Foster at first and complete the double-play.

Berthoud scratched out a 1-0 lead in the bottom half of the first when Addie Spears, who walked to lead off the game and advanced to second on a passed ball, crossed home plate when Erie committed a fielding error on a ball hit by Delaney Fouts. Fouts would record Berthoud’s second, and final, RBI of the game in the fifth when she notched a base hit to drive in Tristan Pope, who had singled to lead off the frame.

After surrendering three runs on four hits in the third, Jorissen turned in a solid effort for the next three innings, allowing just two hits and a walk and keeping the game within Berthoud’s reach. Yet Erie jumped out in the seventh, tallying four hits (including Sanchez’s second two-run homer) and two walks, while also taking advantage of a Berthoud fielding error and hit batter to push seven runs across the plate.

It took only four innings, but BHS was able to push 15 runs across the plate as 10 Lady Spartans tallied at least one base hit and seven recorded RBIs as Berthoud dominated a short-handed Skyline squad. Jorissen threw four shutout innings, allowing just four hits and zero walks while striking out four.

“I’m proud of the girls for getting done what they needed to do today,” a pleased Kouns said. “You know how I try to get my teams to build for the right time of the year and I feel like we’re doing that.”

Despite the loss to Erie, Berthoud appears to be rounding into form as they prepare to make another run at the postseason.

Said Kouns “[Jorissen] is really coming into her own and getting confidence inside the circle … all in all we’re headed in the direction we need to be.”

“We have to play like we did today,” said Spears, who has swapped right field for shortstop with Sedona Cook, when asked after the Skyline game what Berthoud has to do in the final two weeks for the season. “We’ve been getting on the bats, we’ve been playing solid defense in the infield, and the outfield has been great the whole season. We just have to keep that up.”

Berthoud (10-6, 7-4 conf.) hosts Frederick on Sept. 29 for their final regular season home game before making trips to Holy Family and Windsor on Oct. 4 and 6, respectively.