Spartans set to play No. 1 Discovery Canyon in state playoffs 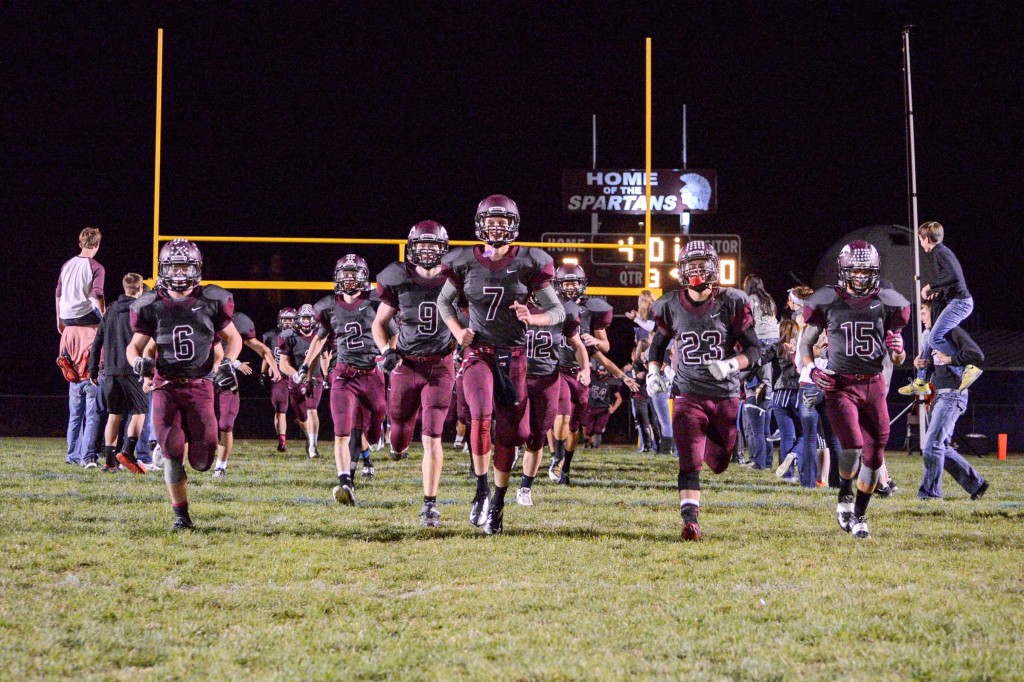 The Berthoud Spartans take the field on Oct. 17.
John Gardner / The Surveyor

On the merit of the Berthoud High School Spartans 7-3 season, the BHS football team earned one of the exclusive 16 spots in the state playoffs. The 2014 season has been a remarkable turn-around for the Spartans. The previous two season’s win total was only three games so the Colorado High School Activities Association’s (CHSAA) official announcement that Berthoud claimed the sixteenth seed was met with excitement by all of those in Spartans Nation. It’s been five years since the football program has advanced to the state playoffs.

After a hard fought 28-14 loss to the No. 3 seeded state playoff bound Roosevelt Roughriders, Berthoud fans had to wait and see what the outcome was for the remaining CHSAA teams vying for the final playoff positions. Friday night’s game was knotted up at 7-7 with only eight minutes left in game before Roosevelt scored twice to seal the victory. Even in defeat, it was Berthoud’s most complete game of the season. The Spartans eliminated many of the errors and mistakes from previous games to battle the Northern League Champions all the way to the final horn.

Roosevelt players were overheard after the game, how hard Berthoud played and they (Berthoud) came out and punched them in mouth. That is a complement in football when your opponent makes that kind of statement, particularly with a Roosevelt team who is known for their own physical and tough play.

The Spartans came in to the Roosevelt game as No. 15 in the wild card points through nine games. As scores rolled in late Friday night, Berthoud needed some key results to occur for inclusion in the state playoff picture. Glenwood Springs No. 16 in wild card points beat Steamboat Springs and that victory claimed a 15 seed as a state qualifier.

Pueblo Central, No. 17 in the wild card points (week nine points), needed a win to advance over Berthoud due to the Roosevelt loss. Pueblo Central played The Classical Academy, who had won only three games this season before its week 10 playoff decider versus Pueblo Central. Heading into the fourth quarter Pueblo Central had a 27-14 lead disheartening all of the BHS faithful, but TCA stormed back and scored two touchdowns to win this key game in southern Colorado 28-27. This outcome, along with BHS’s seven-win season, secured the Spartans as No. 16 in CHSAA wild card points that resulted in the 16th seed in the playoffs.

The Northern League sent a total of four teams –Roosevelt (No. 3), Holy Family (No. 7), Northridge (No. 11) and aforementioned Berthoud (No. 16)– into the state playoffs. The stiff competition the Spartans faced in league play should bode well as Berthoud matches up against the No. 1 seed Discovery Canyon Thunder on Friday, Nov. 7 at 7 p.m. The game will be played at District 20 Stadium at Liberty High School located at 8720 Scarborough Drive in Colorado Springs.

Look for more about the Roosevelt game and the upcoming playoff game in this week’s Berthoud Weekly Surveyor.