There was adversity. It was cold. They hadn’t played a game in two-and-a-half weeks. They overcame a quarantine and had only practiced three times since Oct. 12. In other words, it was a high school football game perfectly befitting the year 2020.

But when Austin Burdette followed his offensive line into the endzone for the game-winning two-point conversion in the second overtime period, none of that seemed to matter. After four quarters and two overtimes, it was the Berthoud High Spartans coming out on top, winning 22-21 over the always-tough Brush Beetdiggers, on a frigid Tuesday night at Max Marr Stadium. 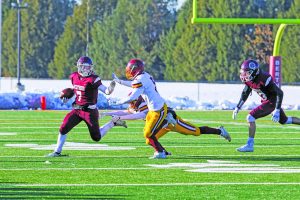 “I think it’s a big deal. To get this win, to get the momentum moving in the right way is very important for our program right now,” Berthoud Head Coach Cory Ticnor said after the game. “After our opening win against Alameda we had a bunch of roadblocks put in our way so for these kids to overcome those roadblocks that weren’t part of the competition and then overcome the roadblocks that were part of the competition tonight just speaks volumes about these kids and I’m in awe of what they did tonight, it was just amazing.”

Burdette’s game-winning conversion followed a touchdown pass from sophomore quarterback Tristan Youngblood to senior tight end Cooper Hidalgo that brought Berthoud to within one, 21-20, on the second possession of the second overtime. “Cooper is my dog, he was there, he had a little window, I hit him, he caught it, touchdown,” Youngblood said. “The line played a hell of a game, they stepped up big tonight, really everyone did. I’m proud of all of our guys tonight, they played an awesome game, we battled adversity for four quarters and two overtimes, I’m glad we came out with a W.”

The decision to go for two – and win or lose the game right there – was made before Berthoud even lined up to answer the Brush score. As Ticnor explained, “When we got the ball, after they scored a touchdown and we were down seven, I told our offensive staff this possession is going to decide it, we’re going to either win by one or we’re going to win by one. We were going for two the entire time.”

Berthoud’s staff did not have to draw up anything fancy or try to play mind games to get the game-winning score, it just finding the will to get enough push up front to get across the goal line. Burdette explained the game-winner was a play they’ve been practicing since the first week of practice. “Our o-line blocked phenomenally on that play I just followed them to the endzone, that was it,” the senior captain said.

While the ultimate outcome of the game was decided on the final play, the obstacles the Spartans overcame in the preceding three hours was the real story of the game.

Berthoud allowed Brush to take an early 7-0 lead on a blocked punt that was recovered and returned for a touchdown. Yet the Spartans answered right back, assembling a nine-play, 61-yard drive capped off with touchdown run from junior running back Tanner Coble on third and goal. Berthoud converted a fourth-and-14 play when Youngblood connected with junior wideout Jaydin Hedelius, who turned in a splendid performance on the night, earlier to keep the drive alive.

Brush’s Kyle Wellen broke off a 56-yard run on the second play of their next possession to re-take the lead 14-8 with 1:32 left in the first quarter.

But that was it for the Beetdiggers as Berthoud’s defense clamped down. The Spartans forced and recovered three fumbles, snagged two interceptions, one by Easton Crompton and one by Shawn Phipps, and stopped Brush on downs twice in the final three quarters of regulation. Senior Tyler Brooks was in on four quarterback sacks, as part of a Berthoud front seven that harassed Brush quarterback Alejandro Maltos-Garcia all game long.

“For the defense to really hold them to basically one touchdown … I think that was the key to the game,” Ticnor said.

Late in the game, Berthoud was flagged for roughing the punter, granting their guests new life with a fresh set of downs. But the Berthoud defense stepped up once again. With Brush near midfield on fourth and nine, the Spartans pass rush forced a hurried throw from Maltos-Garcia and the resulting pass fell incomplete, preserving the 14-14 tie and making overtime a near certainty.

“The biggest thing we overcame that I want to preach to these kids is when we roughed that punter, I think a lot of high school kids probably would have packed it in when it’s 14 degrees out and we just gave them a free first down in the fourth quarter, for us to overcome that is really what I’m proud of tonight,” Ticnor explained.

Despite the obstacles they had faced and overcame for the preceding 48 minutes of football, it would take OT to crown a victor. After a Spartan turnover on the first play of the first overtime, Berthoud blocked Brush’s game-winning field goal attempt. But the Spartans found a way and, in winning the game, proved there are not obstacles too big for this group to overcome.

As Burdette explained, “We faced a lot of adversity this year, even this week we only got three practices in and we did it in wind and snow and 13 degree weather and this team is not afraid to get out here and hit people in the mouth and that’s exactly what Brush tried to do to us but we wouldn’t let them because we’re stronger than they are and we proved we’re the better team; we weren’t going to let these guys come to our new field and beat us.”

Berthoud (2-0, 1-0 conf.) will travel out to Severance for a Saturday afternoon tilt with the Silver Knights (2-1, 2-1 conf.) in what will mark the Spartans second game in four days. Kickoff is set for noon.