Sky’s the limit for Berthoud football 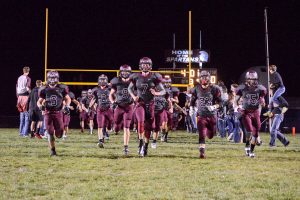 The Berthoud Spartans take the field on Oct. 17, 2014. The team made a statement last year and is looking to punctuate it this year with a returning core of seniors leading the charge, including quarterback Cody Braesch (7).
John Gardner / The Surveyor

In 2014 Berthoud High School’s football program was the surprise of the 3A Northern Conference. After having spent several seasons mired in mediocrity, the Spartans – with a new coaching staff, fresh offensive and defensive philosophies, and a core group of talented juniors – asserted themselves as a force in the 3A ranks. Berthoud went 7-3 in the regular season, and 4-3 in the Northern Conference, to secure their first state playoff berth in five seasons.

This year the Spartans are not a team their opponents will make the mistake of looking past.

“We did sneak up on some teams last year, and I think we earned a little respect in our league and around the state,” said Berthoud Head Football Coach Troy Diffendaffer. “So the message that we keep telling the kids is that it’s not going to be like that, teams know you’re coming to play and you’re going to get everybody’s A-game.”

For their part, the players are well aware they are not going to sneak up on anybody this season.

“I think there is more outside pressure,” said senior outside linebacker and tailback Jimmy Fate. “But I think our team is going to do a good job channeling that to performing at a high level. This is Berthoud; it’s a great community and we don’t want to fail for anybody, so I think we will do a great job channeling that into positive results.”

Senior quarterback Cody Braesch said the team is ready to prove on the field that last year was no fluke.

Fate and Braesch were chosen Berthoud’s two permanent captains for the season and headline a highly talented and very experienced senior class that numbers 20 young men. Among them, wide receiver Jackson Hall, who reeled in 11 touchdowns in 2014, and defensive end Steele Castles, who led the Northern Conference with 6.5 sacks last year, will contend for All-State consideration. Free safety Chad Ellis and linebacker Jamie Gray are impact players on defense, while Stephen Lockard, Ben Douglas and Brendon Stanley help anchor what might be the best offensive line in the league.

Many of the players who comprise the senior class have been playing at the varsity level, in various capacities, since their freshmen seasons. That experience, along with the fact that they spent last season mastering the nuances of the new offensive and defensive schemes, gives the Spartans confidence they can play with anyone in class 3A.

Braesch was noticeably excited, talking about the new wrinkles the team has installed offensively.

“Last season it was kind of learning the basics of our offense, and this year we’ve started to add on, make it a little more complicated, a little more complex … we’ve added some new variations of things and I think it’s going to work very well for us,” Braesch said.

The quarterback also anticipates that the broad array of offensive weapons Berthoud possesses – including Hall, Fate and Ellis, as well as Ben Poirier and Max Bump – will make the Spartans offense all the more dangerous.

“I like the variety we have: we throw it deep; we throw it short; we run up the middle; we run it outside; all of the running backs run; I run; and everyone catches a fair amount of passes,” Braesch said. “We spread the ball out a lot; it’s not just two guys getting the ball the whole season.

While Berthoud figures to be one of the elite offenses in the state, the team is aware defense wins championships. Diffendaffer, with a defensive background, preaches that even though the Spartans are not the biggest team, it has strength in numbers – and that may be more important, with every player on the field rushing to get whoever has the football.

Similar to the offense, the defensive scheme is more developed and complex compared to last season. “Defensively we’re further ahead now,” said Diffendaffer. “They’ve got more of their stunt packages in, a couple of the blitz packages are in and, with the coverages shored up, so now [defensive coordinator] Jeremy [Lanter] is able to add some wrinkles there coverage-wise. We’re really excited about what we’ve seen.”

“We’re not the biggest defense out there, but we fly to the ball and make people regret trying to cross that line of scrimmage, Fate said. “Eleven of our guys are going to be flying around like bullets trying to get that ball on every play.”

The team’s depth this season is an aspect Diffendaffer highlighted. Close to 80 young men came out for the football program this season, the most ever at Berthoud. The greater number of players, which was one of Diffendaffer’s goals when he took over the football program in the spring of 2014, gives Berthoud’s starters more time to rest, better depth in case of injury, and creates competition for playing time which Diffendaffer says, “Only makes us better as a group.”

Asked point-blank if the sky’s the limit for the Spartans this season, Diffendaffer responded, “It is.” “They’ve put in the work, this senior class has paid its dues,” Diffendaffer said. “I believe we’re ready and our goal is to win the league, and we have the potential and the talent to do that. It was great we made [the state playoffs] last year, but we’re looking to push a little deeper this year.”