Every year over 1,000,000 high school students play high school football in the United States. Yet only a few hundred of them earn the right to participate in the annual Blue-Grey All-American bowl games. Berthoud High School’s Jake Lozinski is one of those few. 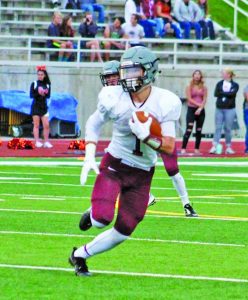 File photo – Berthoud’s Jake Lozinski in a game earlier this year. Lozinski, who plays both football and basketball for BHS, has been invited to play in the prestigious Blue-Grey All-American Bowl game in Tampa, Fla., in January.

Lozinski, who led the Berthoud football team in all-purpose yards each of the last two seasons, was named All-Conference and selected as a team captain this fall, will travel to Tampa, Fla., just after the first of the year to play in the Blue-Grey All-American game at Raymond James Stadium, home of the NFL’s Tampa Bay Buccaneers. Lozinski will play wide receiver for the west region’s grey team that will face off with the east team.

Getting selected to participate in the prestigious invite-only event is no small task. Each year the Blue-Grey Football organization puts on a handful of regional and later super-regional combines at locations all over the nation.

Players attend these events and compete in various competitions, such as the 40-yard dash, that test their raw athleticism and football acumen. The athletes participate in these combines in front of scouts and talent evaluators from colleges and universities as well as a large number of NFL veterans, including former Denver Broncos Ray Crockett, Brian Dawkins and Matt McChesney, who serve as coaches for Blue-Grey Football.

Recruits who get selected will travel to their designated game location where they participate in a pair of practices as well as a large media-day event. According to Blue-Grey Football’s website, the four-day event culminates with the games played this year on Jan. 5, and are covered by major media organizations including, Fox Sports, CBS Sports and USA Today, ESPN.com, Scout.com, Rivals.com and 247Sports.com.

Lozinski explained he had set a goal for himself to play in the Blue-Grey All-American game and devoted himself to the task. As he explained, “At first I was really nervous because I really wanted to be in that top-300 in the region, so I focused up on football all spring and all summer. I didn’t play a spring sport my junior year because I wanted to focus and get into that bowl game, and I had to do what needed to be done – I got stronger and I got faster.”

A bout with an illness last year cost Lozinski a chance to participate in one of the combines, but he was able to make it to another, performing well enough to draw the eye of the coaches and scouts in attendance and earn himself an invite to the prestigious event. When a large packet, which Lozinski said was several inches thick, arrived by mail at his house, informing him of the invitation, he explained, “I was like, ‘wow,’… ‘It’s so cool to be a part of that.”’

An added benefit of participating in the nearly week-long event is the chance for Lozinski to showcase his skills in front of a large number of college coaches and scouts. Said Lozinski, “I think it’s an honor to just be part of something like that, but I also do want to get a look from some scouts from the south and the other parts of the country. I haven’t gotten any offers yet, but that will come if God gives me that path.”