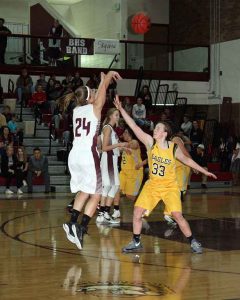 Berthoud’s Morgan Schachterle tosses up a 3-pointer during the contest against the Eagles at Berthoud High School during the Spartan Classic tournament.
Angie Purdy / The Surveyor

In sports, it is the little things that can be the difference between winning and losing. And the Berthoud High School (BHS) girls basketball team is a prime example.

Berthoud, working to integrate a sizable portion of their roster, which is not yet fully conditioned to the rigors of varsity competition, has experienced some ups-and-downs in the early portion of the season. The Lady Spartans are an even .500 in their last four games, notching victories over Mountain View and Summit but coming up short in games against Pueblo East and Silver Creek.

“It’s just a lot of little things,” Berthoud Head Coach Randy Earl said after the 71-48 loss to Pueblo East in game two of the Spartan Classic at BHS on Dec. 9. “We’ve got to be a little smarter on defense, and we’ve got to work a little harder on offense to get ourselves open. We don’t have a lot of experience right now, and so we’ve got to keep working.”

Yet the team appears to be a quick study. As senior Morgan Schachterle explained after Berthoud’s 67-54 win over Mountain View, “When we started off this season I think we were all a little bit nervous, but once we started really playing we all connected and just started playing really well together, and we’re all having a really good time.” The senior was huge in the Lady Spartans win, draining four from downtown on her way to a career-best 16 points. “At the beginning of the week I was really having trouble making my shots, so yesterday at practice I really worked on getting my shot down … It was more of a mental approach, I just slowed down,” Schachterle said.

One of Schachterle’s treys came late in the second quarter as part of a 10-1 scoring run that saw Berthoud transform a 24-22 deficit into a 32-25 lead. Freshman Emily Cavey poured in seven points in the run as the Lady Spartans made good on five of their final six shot attempts of the period.

“It was defense, we finally got them stopped, got some rebounds and came down and ran offense pretty good, just a little bit of everything got us going,” Earl said of his team’s second quarter rally.

Cavey added 12 more points in the second half on her way to a game-high 26, while senior Sarah Howard contributed another 12 in the final 16 minutes, a mark that included a perfect eight-for-eight effort from the charity stripe, as Berthoud cruised to the 13-point victory.

The following game, however, Berthoud ebbed backwards as they fell to a more athletic Pueblo East squad by an unceremonious 71-48 final. The Lady Eagles used their speed advantage to jump out to a 16-2 lead in the first six minutes, a lead the visitors extended to 41-15 by halftime. East was not only more athletic than Berthoud but also dominated in the low post, scoring 20 points in the paint in the first half.

“The losses we’ve had this year [the opposing] teams were quicker and faster than us,” Earl said after the game. “We get caught behind those people and … once we get pinned down there we’re done, we’re not getting in the right places down there.”

Berthoud was able to mount a rally in the second half and out-scored East 33-30, but the hole they dug themselves in the first half proved too deep to overcome. Cavey once again paced Berthoud with 22 points, including a three-for-four mark from beyond the arc and six rebounds. As the freshman standout explained, “I wish we could have figured it out in the first quarter or in the second quarter, but I think in the second half we, to put it simply, just really began to play as a team. When Coach Earl came in at half he told us to pretend it’s a zero-zero game and win this half.”

Led by 17 points from sophomore point guard Sydney Meis to go with 14 from junior Ashlee Burdette and 13 from Howard, Berthoud topped Summit by 20 points, 54-34, in the final game of the Spartan Classic on Dec. 10. Playing in Longmont against Silver Creek on Dec. 12, 23 turnovers doomed Berthoud as the Lady Raptors hung 34 points on the board in the second half. Cavey scored 19 and Burdette added another seven for Berthoud.

Berthoud (4-3) will close out the pre-Christmas break portion of their schedule by hosting Niwot on Dec. 16 and Thompson Valley on Dec. 20. The Lady Spartans will kick off their Tri-Valley Conference schedule after the holidays when they welcome Erie to the BHS gym on Jan. 3.