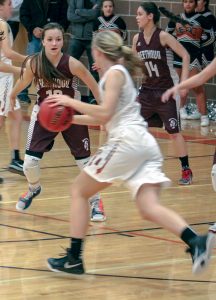 Berthoud’s Sydney Meis defends against a Mead
opponent at BHS on Jan. 26. The Spartans won
the contest 45-32.
Karen Fate / The Surveyor

Having completed half their Tri-Valley Conference (TVC) schedule, the Berthoud High School (BHS) girls’ basketball team knows they are a good, but not the best, team in the TVC. After losing 72-51 to No. 5 ranked Holy Family at BHS on Jan. 22, the Lady Spartans grinded out a win at Mead, 45-32, on Jan. 26.

After some early struggles against the always tough Mead defense, Berthoud found their groove in the second quarter and then, thanks to an All-Conference-like performance from senior Taylor Armitage in the third quarter, took control of the game to cruise to the 13-point win.

Employing their box-and-one zone defense, the Lady Mavericks held Berthoud to just five points on 2-for-11 shooting in the opening period and won the rebound battle 8 to 2.

“It’s the first team that’s been able to really slow us down … they just play really tough defense,” Berthoud Head Coach Randy Earl said. “We were trying to go too fast in the first quarter and we changed to a different offense at quarter, and that really helped us out a lot.”

Berthoud was able to knot the game at 11 at the 6:04 mark in the second, thanks to buckets from Sarah Howard, Maria Fate and Kristina Cavey, the latter two being set up on Armitage assists.

With the score an even 15-all to begin the second half, Armitage took over. The Lady Spartans center began attacking the basket, making good on a pair of and-ones, the first giving Berthoud their first lead of the game, the second extending it to five at 4:16, 24-19, then subsequently adding a trey at 2:41 and a layup as the horn sounded to put Berthoud up 31-22.

Armitage deferred credit to her whole team saying after the game, “It definitely wasn’t me, the team was ready to go. We came out with more intensity in the second half and that’s just what we needed.”

In the final frame, the Lady Spartans made good on 10 of 13 free-throws and held the Lady Mavericks without a field goal until just 1:26 remained in the game, at which point Berthoud held a 43-28 lead.

Things got out of hand early for the Lady Spartans against No. 5 ranked Holy Family in the pair’s matchup at BHS on Jan. 22. The visiting Lady Tigers, employing a full-court press, were able to force seven Berthoud turnovers in the opening four minutes of the game, building a 12-2 lead along the way.

Having to play catch-up is not something the Lady Spartans have much experience, and it showed as Cavey, who scored half of Berthoud’s 24 first-half points on her way to a game-high 33, explained.

“We weren’t in quite the right spots we needed to be so we had too many turnovers,” Cavey said. “That’s a common rule in basketball; you don’t try to hit the sidelines so much, you really want to try to stay toward the middle where they can’t trap you.”

Earl explained it was not just the Holy Family press that caused Berthoud’s first-half problems but the team did not rebound well, failed to defend shots and missed too many of their own. Yet, after Berthoud won the second half 27-26, Earl took a glass-half-full approach.

“If we had battled in the first half like we did in the second half we would’ve been fine,” Earl said.