The great coaches are the ones who can survey their available crop of talent, evaluate the strengths and weaknesses and then design schemes and employ game-plans that get the most in return.

Entering his fifth season as head coach of the Berthoud High girls basketball team, Alan Gibson remarked that this season, given the makeup of his roster, the team will have a different look from the recent past.

Gibson explained the team will play at a “breakneck” pace from start to finish, from one end of the floor to the other. The fast-paced play style will take advantage of the Lady Spartans’ biggest collective strength – top-notch athleticism – but at the same time will require more frequent substitutions and thus more players seeing considerable minutes on the court.

“We have to play with tremendous energy the entire time, that’s number one, number two, while we’re playing at breakneck pace, we have to make great decisions with the basketball and number three, we have to rebound at both ends,” Gibson said when asked what will be necessary to make his planned approach work. 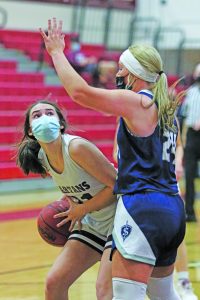 Photo by ACP Media – Berthoud’s Ally Padilla goes up for a shot in a game last season. Padilla is one of seven seniors on a Lady Spartans squad that will have a new look but the same high expectations for this season.

An old adage about the game of basketball is that a coach will “dress eight (players), play seven, and trust six,” but Gibson explained that could not be further from the truth regarding this year’s squad. “We will probably suit 15 and play close to all of them, at least 12, and try to get the right combinations out there at the right times.”

“It’s just about staying positive and since we’re going to be subbing out a lot, we have to be able to work with everybody and that starts in practice,” Koolstra explained, her comments reinforced by Davidson who added, “During practice, we switch things up, everyone practices with everyone, we intermix the teams and that will really help us this year with subbing out as much as we will be.”

Asked if the frequent substitutions could possibly hinder players from being able to get into the groove, the seniors stated that is not a concern so long as the effort put forth when on the floor is there. “I think it motivates us to go harder in general because we know we won’t be out there for very long, so we put in 100% effort and go as hard as we can,” Cook said while Kirkpatrick added, “It’s going to be about staying on top of things, stay motivated the whole game, he’s going to have us subbing out a lot and because of that we have to know to go hard the whole time.” The team’s motto this season, developed the seven seniors, is “to work is to win,” and the buy-in for it is there, program-wide.

Padilla enters her senior season as the most experienced player on the squad with 69 games played, Davidson is second with 41, and comes off a junior season where she scored 254 points, grabbed 154 rebounds and swiped 50 steals in 16 games on her way to All-Conference honors.

Padilla, for her part, kept the focus on the big picture, explaining that success, as it’s been throughout her career at Berthoud, will be a team effort and keeping positive energy will be key.

“This year we’ve talked a lot about keeping a positive mindset and a positive environment because smiling, high-fiving your teammates, cheering everybody on, goes a long way in the game setting and the practice setting too, we really want to keep that going, doing that will help us,” she said.

“I think if we play as a team rather than just as individual players, we will be successful this year,” Fischer said while Premer summed up the feelings of her senior teammates in remarking,

“It’s our last year playing, it’s just leaving it all on the floor and giving it all we have will mean success.”

The Lady Spartans will tipoff the 2021-22 season on Nov. 30 when they will welcome Greeley Central to the Rusty Mathena Gymnasium.