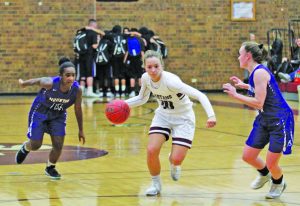 Photo by Tiffany Rafferty – Berthoud’s Sydney Leeper splits a pair of defenders and races down court in a game at BHS earlier this season. Leeper and the Lady Spartans are off to a hot start this season as winners of seven-straight games.

It is not a cliché either; the team honestly looks at themselves as a family. It is no coincidence then that this indelible bond has led to tremendous success on the court in the early weeks of the 2018-19 season. Berthoud swept their way through the completion last weekend at the Longmont Tournament, beating Thomas Jefferson 48-37 Thursday afternoon, destroying Longmont 63-36 Friday night, and finally topping Glenwood Springs by a 57-41 final Saturday morning.

Berthoud kept things going Tuesday night when they opened Tri-Valley Conference (TVC) play, grinding out a 57-45 win over the Mead at the BHS gym. Fresh off their seventh win of the year, senior point guard Sydney Leeper spoke of the team’s bond.

“This is not a team, this is a family, we are a sisterhood, we believe in that deeply. We stick together and we go through the goods and the bads and persevere together,” Leeper said. “I can barely describe how much it means. Because we have such a good family we come together in a different way than most teams do. We don’t break apart into individuals and try to win the game by ourselves, we work as a unit.”

In the first half against Mead, Berthoud had plenty of opportunities to score, but shots repeatedly rimmed-out or just missed the mark, keeping the score close throughout the first three quarters. Berthoud shot only eight-for-35 from the floor and were out-rebounded 28-11 in a first half that ended in a 19-19 tie. A few minutes into the second half, however, Berthoud’s shots began to find the bottom of the net. Sophomore Bre Fowler scored 10 points, six of which came from three-point range, and Eriana Rennaker added a trey as Berthoud took a 33-26 lead by the 2:28 mark in the third.

Asked after the game about the offensive spark in the second half, Berthoud Head Coach Alan Gibson explained, “We really thought at halftime we were getting the shots that we wanted and we were just going to have to keep taking them, because I don’t think we could have gotten much better shots and we took a ton of them.”

Berthoud kept at it and, after finding themselves trailing 37-33 with 7:06 left in the game, shots started falling and the Lady Spartans press defense forced multiple Mead turnovers. Maddie Barcewski made an and-one and, after getting the ball right back, McKayla Milan’s lay-up put Berthoud ahead for good, 42-40. A pair of free throws, one each from Leeper and Fowler, and a trey from Fowler put Berthoud ahead 49-40 with 3:00 left in the game. Fowler finished the night with a game-high 22 points.

Berthoud’s early shooting woes can be at least partially attributed to the size advantage Mead possessed in the post, and the six-foot-two Milan getting into early foul trouble did not help things for Berthoud. Yet, Milan and Barcewski came up big when Berthoud switched to a more aggressive press defense in the fourth quarter; the two juniors were instrumental in forcing nine Mead turnovers in the final eight minutes of play.

“We amped up the pressure a little bit and tried to get things more on the other side of half court rather than let them bring it to us. We took our defense to them and eventually we just persevered; I think that’s the best word for tonight,” Gibson said. “When we were able to have Mckayla and Maddie in there at the same time, those two work really well together. They communicate that really well.”

Leeper explained even with the frustrating first half and being down in the fourth quarter for the first time all year, Berthoud never lost faith. “We’ve always had the capabilities to pull through. We’re a very solid team, and it’s moments like that where the team is tested and, I don’t know how to say it, but our team doesn’t fail in situations like that,” she said.

Berthoud (7-0, 1-0 conf.) will face their stiffest test to this point of the season on Friday night when they welcome defending 4A state champion Evergreen (4-2) to the BHS gym.