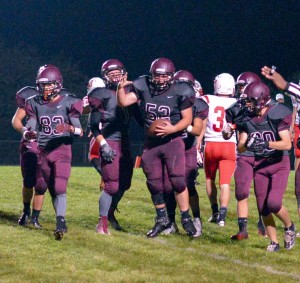 Berthoud defensive lineman Ryan Markham celebrates after an interception in the third quarter of the game versus the Arvada Bulldogs on Sept. 5.
John Gardner / The Surveyor

An exuberant student body poured on to Max Marr Field after the Berthoud High School Spartans football team dismantled the Arvada Bulldogs 54-0 on Sept. 5. Assistant coach Anthony Perkins, who led the players in a post game celebratory cheer, encouraged the students who rushed the field to join in with the team for the celebration. It was all smiles by the players and the supporting students in this moment of oneness in Spartans Nation.

Coming together for a common cause breeds oneness whether it’s a team, a school or a community. Friday night, Spartans Nation was all for one and one for all to kickoff its 2014 home opener.

Before the students, family and friends happily descended on the Max Marr Field turf, the Spartans team used each snap and all 48 minutes on the clock to make a commanding statement. Gone are the days of Spartans football being the hunted; they are out to prove that they are the hunters. And for the second week in a row, hunters they were.

The defensive players chased and pursued their prey with focus and determination. The offense capitalized time and again on scoring opportunities, which were frequently produced by the stout Spartans’ defense.

No one may be enjoying the early season positive momentum more than the seniors. On-the-field success for the class of 2015 has been rare. To open the 2014 season at home with a big win for seniors Matt Bonds, Micol Woodiel, Ryan De Moudt and Ryan Markham has to be very gratifying. As players in their grade continued to drop out of the football program over the years, these young men remained faithful to Spartans football. This season could be that very special year to remember for each of them and a well-earned reward in perseverance.

Bonds and Markham both had interceptions in front of the home crowd, Woodiel had a touchdown and a blocked punt, and De Moudt had a sack and contributed a key run that led to a Spartans touchdown. All four of these players are starters on defense and are a significant reason Berthoud plays as a tough and relentless defensive unit.

Another senior who made a huge contribution was Kurt Hucal. The kicker used his strong and accurate kicking leg to connect on all of his seven extra points and added a 26-yard field goal. Having a kicker who can put three points on the board adds another important weapon to head coach Troy Diffendaffer’s arsenal, making this team even more potent. Hucal also took the kicker tag off and replaced that with the football player moniker by making a touchdown-saving tackle on the Bulldogs most dynamic player. The Spartans senior became the hunter by tackling Elias De La Rosa on a kick-off return that helped secure Berthoud’s shutout.

Another example of the Spartans’ tenacity was on a play where guard Stephen Lockard and center Jamie Gray were blocking a Bulldog player 15 yards past the line of scrimmage. Players are taught to play through the whistle, in other words never relenting on their opponent until an official blows his whistle to stop the play. On this sequence, the play was clearly over, but the officials were late in blowing the whistle. Until the play was officially completed, Lockard and Gray continued to do their job as they are coached. This play had the Bulldogs coaches screaming from the sidelines as maroon-clad players aggressively never stopped blocking the Arvada players until they heard the whistle.

These extra effort traits are what good football teams do and it requires coaching that demands playing through the whistle and the desire by the players to execute and never take their foot off the pedal.

Berthoud travels to Fort Lupton to close out their non-league schedule against the Blue Devils Friday night. The mark of a good team isn’t to look at what you have already done, but to look forward and improve in each game. Fort Lupton is another opportunity to grow as a team and continue to make Spartans Nation proud.