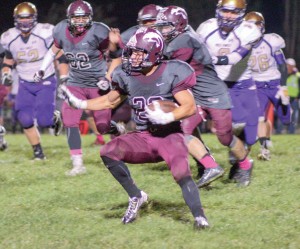 The Berthoud High School football team (5-1) came into last Friday’s game as the no. 8 ranked squad in the state and lined up against the state’s no. 4 ranked Holy Family Tigers (5-1). The 43-7 setback was a good measuring stick for the Spartans in understanding what it takes to be a top-five team in Colorado 3A football. The Spartans learned they could take a punch by battling the Tigers to a 7-6 lead through the first quarter, but allowed the other 37 points in the second and third quarters. The Spartans learned that every play, all 166 of them in this game, has to be played at the highest level to compete with an elite team.

The Spartans realized they can possibly drop balls, have turnovers and miss tackles against middle-of-the-pack competition and still win, but they can’t make those mistakes against the best the state has to offer.

The good news is that those characteristics can be corrected. It isn’t a lack of talent for the Spartans, even though they’ll likely match up many weeks as the smaller team. But the game of football is a game of will and execution, and whichever team can impose their will and execute the best almost always wins.

This Friday night, the Spartans travel to Mead High School to play a 3-win/3-loss Mavericks team that is well coached and plays sound fundamental football. Last Friday night’s game is in Berthoud’s rearview mirror, but tomorrow night against the Mavericks creates some pressure to see if the Spartans can start playing a cleaner and more mistake-free game than they played last week.

The legendary World War I and II U.S. General George S. Patton once said, “Pressure makes diamonds.” Pressure is also a privilege. If a team is in a position of pressure, then the stakes at hand are great and an opportunity for success is present.

I would wager that this Spartans football program, from the players to their coaches, will take the positive steps to use what they learned from last week. Before the season began the Spartans’ program had a goal to make the playoffs and, in light of the past few years, I don’t think many people outside of the Spartans football family believed that was possible. Berthoud enters Friday’s game with five wins and a single loss. They can use that loss to make them an even better team.

Mead junior running back Dane Myers, the fourth leading rusher in 3A, averages 131 yards a game. Myers has also scored 11 touchdowns. Fellow junior Tony Feula, the Mavericks’ quarterback, has thrown for 745 yards while completing almost 60 percent of his passes. The Mavericks defense can be stingy, giving up only six points to Niwot last week, and two weeks prior to that game only allowed a single touchdown to Erie.

The Berthoud versus Mead game not only offers a chance to see how the Spartans respond after experiencing their first loss of the season, but also both teams get to play for the inaugural Long’s Peak Trophy. The Long’s Peak Trophy is an annual award sponsored by the Berthoud Sports Hall of Fame. This is a perpetual trophy that will be given to the winning team between the Spartans vs. Mavericks each year and will have the game score and date engraved on the trophy.