For Dillon McNamee, the newly-minted head coach of the Berthoud High School (BHS) football team, it all begins with building relationships. McNamee was formally introduced as the new head coach at an event last Thursday afternoon at BHS and explained his order of business will be establishing trust and building relationships in the Berthoud community. 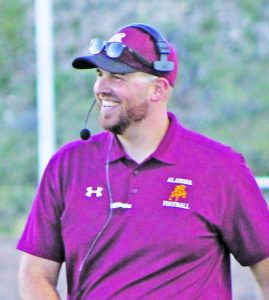 McNamee used a quote, which he admittedly borrowed and is one that has been attributed to everyone from President Teddy Roosevelt to Super Bowl-winning coach Dick Vermeil in saying, “Kids don’t care how much you know until they know how much you care,” in describing his overarching approach as a high-school coach. “I’m going to let them know I care and start there,” McNamee said.

Expanding upon it further, Berthoud football’s new leading man explained, “Xs and Os is important. Everyone always thinks that’s the first step, but for me it’s about building culture, getting some core values that we can all buy into, getting people to believe that they’re part of something that’s bigger than themselves, because that’s very rewarding when being part of a football team, so that’s what we’re working on.”

BHS assistant principal / athletic director, Michael DeWall, explained McNamee won over him and his search committee by demonstrating he’s not just paying lip-service in using the Vermeil quote. “How he talked about relationship-building being a priority, that’s important to us,” DeWall said. “In reality, it’s truly what sold us on Dillon is that he said he wanted to build relationships, but he gave us multiple examples of how he would go about building relationships and some successes he’s had in the past in that endeavor. It really resonated with us as a committee.”

McNamee is a no stranger to these parts, having grown up in Fort Collins, where he played football for Rocky Mountain High School, graduating in 2010, before heading to play collegiately at Adam’s State, where he shined as an offensive tackle for four years for the Grizzlies. After graduating, McNamee began working as a social-studies teacher in Alamosa and also burnished his coaching credentials with the football, basketball and track-and-field teams. McNamee spent the last three seasons as head coach of the Alamosa football team, compiling a 14-14 record in three seasons in the 2A Intermountain League.

McNamee explained his successes on the field as both a high school and college player have helped shape his coaching philosophy. “It’s going to be about toughness and hard work, I knew guys and had guys that played for me that didn’t look like offensive lineman and they were All-State and All-Conference players just because they worked their rear ends off. We want to bring in that toughness, that work ethic. It’s rewarding for a kid. I remember when I was a player, when I first had that success that was huge for me and want to share that experience for these kids too,” he explained.

With an ever-increasing emphasis being placed on developmental leagues below the high-school level, McNamee explained that once he arrives in Berthoud at the conclusion of the school year, he plans to reach out to youth- and middle-school programs in the area to begin shaping Spartan football players of the future.

Said McNamee, “As soon as I get up here I want to make all those contacts. I think a high-school program can be kind of a tool that youth- and middle-school programs can use. I’d like to meet those youth- and middle-school coaches, build those contacts and see those programs once we get here and figure out what we’re doing. Let’s extend that and get kids excited about being a Berthoud Spartan when they get to high school.”

McNamee also made a point of emphasizing his belief that high school sports is as much about developing young people as it is winning games and competing for championships, saying, “I want to let them know I care about them, that I care about them as people first and football players second. I want to develop our players to be great young men, both now and later in life, and hopefully win some football games along the way.”

“Thinking about the community and what our community needs was very important for us. What worked out just awesomely is that we felt that one of his biggest strengths was his ability to handle the Berthoud community and its uniqueness,” DeWall said.

McNamee expressed he’s ready to hit the ground running beginning this summer with various conditioning and team camp activities. “We want to get some new excitement into the Berthoud program,” he said enthusiastically.

The 2019 football season will begin with formal team practices starting in mid-August. Berthoud will once again be competing in the 2A Patriot-West League.