On and off the field 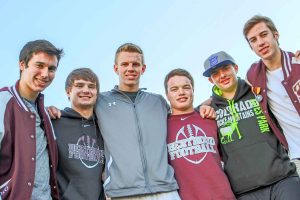 From left to right: Berthoud’s Brendon Stanley, Chad Ellis, Cody Braesch, Jimmy Fate, Stephen Lockard and Jackson Hall have played football together since fourth grade. Now, all juniors at BHS, they prepare to play in their first playoff game as Spartans.
Photo by Dan Megenhardt

Barely 12 hours removed from a disappointing loss to Holy Family, and not even 30 minutes after completing a grueling Saturday morning conditioning drill, a group of Berthoud High School football players chowed down on eggs, toast, hash browns and other assorted breakfast fare at Grandpa’s Café in Berthoud.

It might be the most tired cliché in all of sports to refer to a team as a “family,” to teammates as “brothers,” but clichés are clichés for a reason; they’re usually true. And for six Berthoud football players, including Fate, Brendon Stanley, Cody Braesch, Chad Ellis, Jackson Hall and Stephen Lockard, all juniors who comprise the core of the playoff-bound Berthoud Spartans’ football team, that is precisely what they are to one another.

As they shared stories–some humorous, others serious, all inspiring in one way or another, and a few not fit to print in the pages of a community newspaper–the kinship between them was palpable on that unseasonably warm and sunny October morning. It’s a bond shared by the six that is in no way forced or some contrived method of motivation to win football games, but rather one forged over more than eight years of friendship, a period roughly equal to half of each of their lives.

“Since fourth grade, especially during football season, we’re all just always together, it’s like family,” said Braesch, who, while playing football in the Berthoud Youth Athletic Association (BYAA) during his elementary school years, was given the nickname “chicken legs” by his compatriots.

“Chicken legs” remains to this day his team’s quarterback, protected on his blind side by left tackle Stanley, who has donned the appellation “Anchor” for just as long. 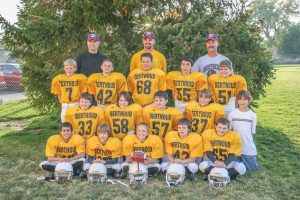 The sextet’s closeness off the field has always paid dividends on it.

As the Spartans prepare for the opening round of the state playoffs, where No. 16 Berthoud faces No. 1 Discovery Canyon, the specter of the postseason that carries with it a chance to win a state title does not loom too large for them. This is a group that has been conditioned to expect to win football games and compete for championships from a young age.

Having played together, and won together since first putting on the shoulder pads, their first two seasons of high school football–where Berthoud compiled a 3-16 record–were difficult to stomach.

“We won three championships (in BYAA) or were in the championship like five times, it was hard to come to high school and be losing,” explained Braesch. “Even freshman and sophomore year I knew we were going to pull it together and be able to do it, but even when we were losing there is no one else I would want to be with me on that field than these guys.”

They are the first to point out Berthoud’s success in the 2014 season–a 7-3 overall record and a spot in the 16-team state playoff bracket–isn’t attributable only to them, but all six do play critical starting roles on the Berthoud squad.

Braesch is the Spartans’ starting quarterback. Fate leads his team with 518 rushing yards and 66 total tackles. Hall is the No. 1 wide receiver, who, despite regularly being double-teamed, reeled in a team-high 11 touchdown receptions in the regular season. Ellis is a jack-of-all-trades player who contributes in all three phases of the game as a free safety, tailback and return man, compiling 697 all-purpose yards while tallying 33 total tackles and creating three turnovers on defense this season.

While those four get the headlines and compile the gaudy numbers, all are acutely aware that it is the men up front – the “big uglies” as Hall affectionately called them – that are the driving force of any team.

“I think anyone who knows anything about football knows that it all starts with them, nothing we do matters without the offensive line,” said Braesch.

Stanley and Lockard, who comprise the left side of the Spartans’ o-line, embrace their roles.

“I don’t care if they’re coming to see me or not, I’m there to win a football game,” said Stanley. “And if that means I have to go make holes for Jimmy and Chad and block for Cody, that’s what I’m going to do for my family.”

“We’ve been lineman since fourth grade, so we’re used to not being in the limelight,” added a chuckling Lockard.

The selfless mentality embraced by all and clearly demonstrated in comments from the “big uglies” was born in the earliest days of their football careers.

Coached, both on and off the field, by a group that included several of their fathers, the six earned credit for what they called “hustle plays,” not touchdowns but rather good blocks, tackles, fumble recoveries and the like.

A large piece of wood, known as the “hit stick,” was marked off in sections for each player on the team. When a player made a play that drew praise from the coaching staff, he was allowed to cut a notch in his section of the hit stick. At the end of the season the sections were cut apart and each player given his piece; each still has their sections to this day.

Hall spoke fondly of the memory and the lessons it helped teach him as both a player and as a person.

“I will have that with me forever,” Hall said. “I don’t need a piece of wood anymore, but I know when I make a good play that I got that notch.”

In listening to the six reminisce about growing up together, it is impossible to not comprehend just how central a role football has played in their lives. As early as fourth grade the group would assemble at one of their homes to watch tape of their games that had been recorded by a parent and transferred to disc; discs that each still have in their possession.

“Ever since we were little kids we’d all stay together and hang out at one guy’s house, now I kind of feel bad for their parents,” Ellis said.

“I remember talking to Cody and Jimmy about this, I call it the ‘Jordan Major effect’ – he’s the high school player, he’s the quarterback, and I looked up to him and I know people do that with us now, it’s just so surreal,” explained Hall.

“When we were little we looked at those guys like they were superheroes,” Braesch added. “And now that we’re here it’s crazy to think that there are kids that think of us like that.”

Now that those days are here, and as the six boys prepare to take the field Friday night in their first high school playoff game, they feel a sense of urgency. Each of them is beginning to see the light at the end of the tunnel; the tunnel of youth and adolescence that will–before they know it–come to an end.

“Next year is going to be great and terrible at the same time,” Fate said. “I’m just glad we have one more year together.”

So here they find themselves, after more than eight years of friendship and football, with at most 18 games left. Yet, to the man, they have not lost sight of what really matters at the end of the day–their friendship with one another and the litany of memories that came–and continues to come–with it.

“You’re not going to remember every play,” Fate said. “What you’re going to remember are those late nights at your friend’s house, things like this, breakfast on Saturday morning, that’s what’s going to go through life with you.”