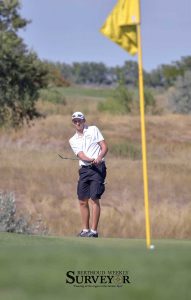 Berthoud’s Joshua Schumacher hits his wedge within inches of the pin on hole No. 8 at Highland Meadows on Sept. 17. Schumacher is the lone Spartan preparing for the state tournament this year.
John Gardner / The Surveyor

Berthoud sophomore Joshua Schumacher finished the 4A Northern Regional Golf tournament at Quail Dunes Golf Course in Fort Morgan, Tuesday, shooting a 6-over par 78. That score was good enough to finish in fifth place and punched his ticket to the 4A State Golf Tournament to be played at Fox Hill Country Club in Longmont, Oct. 5-6. The 6-foot, 5-inch golfer was two strokes over par after nine holes and managed to keep his game in check as he played the back nine to finish at plus 6.

In a surprisingly unfortunate twist, Berthoud’s No. 1 golfer Shawn Solem struggled at regionals, finishing tied for 34 with a 16-over-par 88. Solem won the 4A Regionals last year in a playoff against Silver Creek’s Jackson Solem (no relation). Jackson Solem finished in first place this year at regionals, shooting a 1-over-par 73.

Berthoud golfers Evan Poll and Braden Hull finished out of state qulifying contention tied for 23 and tied for 43, respectively. However, the season wasn’t a bust by any means, according to Berthoud boys golf coach, Mike King.

“We’ve had a good year,” said King. “A really good year. We’re holding our heads up and are proud of what we’ve achieved this year.”

For the first time in school history, the Spartans took a Tri-Valley League title with its second-place finish at the Tri-Valley League match hosted by Roosevelt High School at Highland Meadows Golf Course in Windsor on Sept. 17.

Solem had a much better round that day and finished two strokes behind Holy Family’s Jack Marty (70), shooting a 72, and tying Windsor’s Cole Krantz for second place. Solem started the day off well, finishing the front nine at three under par, but lost a couple of strokes early on the back nine, carding back-to-back bogeys on holes 10, 11, 13 and 14 to put him at plus one on the day. From there, Solem kept his composure and maintained to stay in second place.

“Shawn played good [Sept. 17],” said King. “We’re in pretty good place strategically, now we have to go out and make the shots.”

Berthoud’s Schumacher shot a 76 at Highland Meadowns to finish his day tied for fourth place. That was after suffering a two-stroke penalty after he hit another player’s ball from the fairway. But the mistake didn’t faze him, according to King.

“He was having fun and the course fits him pretty well, so he managed to just play on and finish strong,” King said.

Three other Berthoud golfers carded scores in the 80s at Highland Meadows: Evan Poll shot an 81, Jack Hummel shot an 86 and Braden Hull shot an 89. As a team Berthoud finished one stroke behind Holy Family’s 228 with a 229; good enough for second place and the Tri-Valley title, King said.