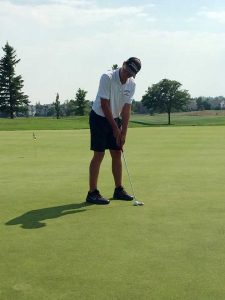 Berthoud’s Shawn Solem putts during the Aug. 24 round at Ute Creek Golf Course in Longmont.
Dan Karpiel / The Surveyor

Any competitor, in every sport and at any level, wants to win. That is the very reason any athlete plays; enjoyment, exercise, camaraderie, etc. are all secondary considerations to victory. And taking home first place is something the Berthoud High School golfers still have on their to-do list three tournaments into the 2015 season.

Playing on Aug. 24 at Ute Creek Golf Course in Longmont, the Spartans posted what was by far their best team score this season, 232, yet still had to settle for second place after Sterling turned in a 224.

It was the third time in as many tries this season the Spartans took home the silver medal. Preceding the Skyline League Match at Ute Creek, Berthoud carded a 243 on Aug. 21, at the Chad Godfrey Invitational at the Northeastern Junior College Golf Course in Sterling and a 243 in the season opener at Pelican Lakes in Windsor. Both events were won by the respective host team.

“We’re doing things right, we’re headed in the right direction. I’ve got some players starting to get used to this kind of environment and we’re playing well,” said Berthoud Head Coach Mike King after the Skyline match. “I really like where we’re at.”

In addition to two-time state qualifier Shawn Solem, whose two-over-par 74 was good enough for third place in individual competition at Ute Creek, was Jack Hummel who shot a three-over 75. The score was Hummel’s best round, by 17 strokes, of the season. Braden Hull turned in an 11-over 83 as the third-low player on Berthoud’s varsity five-some, while Cameron Poll shot an 89 and Evan Poll a 95 for the Spartans.

Shooting 75, after he carded a 96 just two days prior in Sterling, was a major vindication for Hummel.

“My first two tournaments I didn’t play well at all and it really frustrated me because I’ve been working really hard,” Hummel said, “but it paid off [today]. I think I hit every fairway today and my putting was on, I think I had seven one-putts on the front and it was just coming together today.” Hummel’s 75 included a one-under-par 35 on the back nine.

Asked what the difference was between the Skyline match and the two previous tournaments in which he has competed this season, Hummel chalked it all up to his state of mind.

“I think when I do badly I get frustrated and I don’t take my time,” he said. “But today I knew I was doing well and I didn’t want to lose it so I just took my time, read my putts and everything and just got it down.”

Hummel’s sentiment was one with which King agreed.

“It’s such a mental game, [in previous tournaments] Jack stumbled and he couldn’t get his feet back under him. Today he got off to a good start and the game seemed simple to him. You’re not going to have a good hole every hole and it’s how you deal with that … he had a good day today, he made some putts, he made some chips, he hit some fairways, this game can be pretty easy when you do everything right.”

Solem’s 74 did not come without a fair amount of labor. The senior spoke about some inconsistencies in his game from tee to green.

“On the front I wasn’t hitting it well at all, but I threw in some birdies to keep it going a little bit,” Solem said. “[Putting] was on and off for me. I was reading [the greens] good today but my speed was just off.”

Solem was able to card three birdies, on holes three, four and seven, on the front nine to make the turn at an even-par 36. On the back he finished his round strongly by making birdie on the challenging par-four 18th that features a large water hazard extending down the right side of the fairway and bordering the green. After sending his drive down the left side of the fairway, Solem’s approach shot − which he described as a three-quarters strength eight-iron from 164 yards out − landed just below the cup and afforded the senior a makeable birdie putt.

“Anytime you finish with a birdie, it just leaves it on a good note,” Solem said.

The Spartans will travel out to the Eaton Country Club for an invitational tournament on Thursday, Aug. 27, and will play their next league match on Monday, Aug. 31, at the Saddleback Golf Course in Firestone.