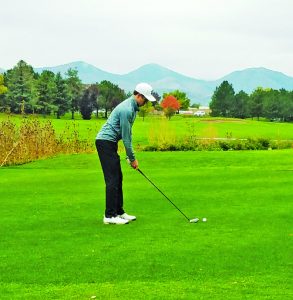 Berthoud Junior Cameron Poll prepares to hit a tee shot in the second round of the 4A state golf tournament at Raccoon Creek in Littleton.

For Cameron Poll, each swing, each putt, each chip, was a learning opportunity. The Berthoud High School junior joined the elite ranks of the school’s golf program as he competed in the 4A state tournament at Raccoon Creek in Littleton on Monday and Tuesday. Poll finished in a respectable tie for 31st place, in an 84-player field, with a two-day, 36-hole score of 166 (+22).

“It was an experience that I will never forget, and it was fun meeting new kids from high schools all over Colorado,” Poll said. “It the biggest opportunity I’ve ever had to display my talent.” The junior explained competing at state was quite different from league matches, where the focus was on team goals, but state was “100 percent about me and the steps I was going to take going into my senior year.”

Raccoon Creek offered the state’s best high school golfers some unique challenges. The course itself is no slouch, with a 73.3 rating and 131 slope, several dog-leg fairways, mature trees throughout the course, and water hazards on multiple holes. The course forces players to make a risk-reward calculation on nearly every shot.

Berthoud Head Coach Mike Burkett mentioned multiple times throughout the season about Poll’s ability to “grind” and his adeptness staying focused and mentally strong through the ups and downs that are endemic to the sport. It was a trait that served the Spartans lone representative at the state tourney well. Poll had to battle wet and windy conditions and diabolical pin placements in the two days at Raccoon Creek. Despite the unfavorable conditions, Poll carded an 85 on Monday before hanging an impressive 81 on the board in day two.

“Even though my 36-hole score might not be that pretty, what people don’t know is how much worse it could have really been if I decided to shut down mentally. I’d say the best aspects of my game were three-wood off the tees and ability to get up and down to save crucial pars,” Poll explained. “He hit a lot of quality shots in miserable conditions,” Burkett said, “He will be really proud in a few days.”

Of the 84 golfers who took to Raccoon Creek, only seven finished with a 36-hole score that was single digits over par. Thompson Valley’s Darren Edwards won the individual competition with a 146, shooting one-over 73s on both days.

Poll explained that experience of competing at state was invaluable and will serve him well going into his senior year next fall. “The biggest thing I took from state this year was every swing counts and bad shots will come, but you just have to put them behind you,” he said. “I was able to make it to state not playing my best at regionals, so next year I’m setting really high expectations for myself and figuring out how to get those crucial strokes back.” Burkett said All-State is a reasonable goal for Poll next season.