Boys basketball searching for an identity 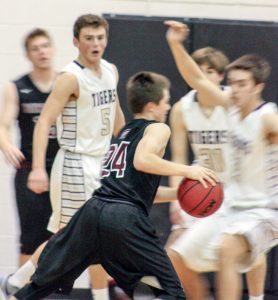 Berthoud’s Jake Yuska makes a move to the basket against the Holy Family Tigers on Jan. 21.
Angie Purdy / The Surveyor

To call the month of January disappointing for the Berthoud High School (BHS) boys basketball team would be an understatement. The Spartans have dropped six straight Tri-Valley Conference (TVC) games, losing their most recent to Mead 68-42 on Jan. 26.

The young Berthoud squad appears to be a team that, even 16 games into the season, is still in search of its identity. Head Coach Mike Burkett said after the loss to Mead that he “feels just awful” and is, “grasping at straws here.

“I’m trying to figure out what you can do; trying anything I can try,” he said.

Starting a lineup that featured three sophomores and a freshman, along with senior Jamie Gray, the Spartans found themselves down 8-1 at the 5:57 mark in the first period. Berthoud had several decent shot attempts rim-out while the Mavericks took advantage of five Berthoud turnovers and out-rebounded the Spartans by nearly a two-to-one clip to take a 17-9 lead.

“We got ourselves some opportunities, we had some layups and we missed, I think, five of six of them,” Burkett said after the game. “I think we were one-for-six from the free-throw line and you’re not going to beat a whole lot of teams when you do that.”

The Spartans staged a rally midway through the second, as a pair of buckets from Gray, one from sophomore Jake Yuska, who contributed six points on the night, and a trey from senior Dylan Adaza got Berthoud to within six, 24-18, in the second. Yet Mead added six from the floor and another two from the line, halting the Spartans’ nascent rally and giving the Mavericks a 32-18 halftime lead.

A steal and dunk late in the third from Berthoud sophomore standout McCallan Castles was the Spartans’ last gasp of the night, as Mead outscored Berthoud 36-24 in the second half on their way to the 26-point win.

Burkett, although disappointed with the last six games, was adamant his team will give it all they have in their final seven.

“What I told the kids is you can get bitter or you can get better … and you’re going to have some days when you take some lumps,” Burkett said. “But these are great kids from great families [and] if this is as bad as it ever gets, losing a basketball game, they’ve got it pretty good.”

The good news for Berthoud (4-12, 1-6 conf.) is they host Erie (1-15, 0-7 conf.), the one TVC team whom they have beaten, on Jan. 29. The Spartans then have the opportunity to exact revenge on each of their TVC rivals over the course of their final six games of the season.