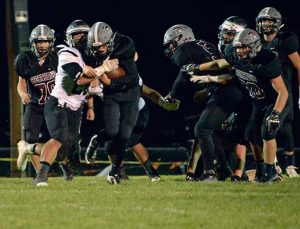 Berthoud’s Brock Voth breaks a tackle for a short gain during the Oct. 14 game versus Roosevelt at Berthoud High School.
John Gardner / The Surveyor

Things got off to a bad start and went downhill from there for the Berthoud High School (BHS) football team in their Oct. 14 game with Tri-Valley Conference (TVC) rival Roosevelt. The Spartans and Roughriders both entered the game with a 1-5 record, but it was clear from the onset the visiting ‘Riders are a few paces ahead in their rebuild, as they dominated Berthoud up and down the field, winning 48-3.

The die was cast on the opening kickoff when Roosevelt’s Trent Beall found a few creases in Berthoud’s coverage unit and went 95 yards to pay dirt, giving the visitors a 6-0 lead after just 15 seconds had elapsed. It was the fourth return touchdown Berthoud has given up on the season. The ‘Riders found the end zone on each of their next three possessions on runs from Jay McCloughan, Kaulana Ukishima and Cameron Hurtado to take a 28-0 lead with 1:39 left in the first quarter.

The story really was not much different for Berthoud as it’s been in their prior games; youth and inexperience, combined with some mental mistakes, put the Spartans at a serious disadvantage.

After assembling a nine-play, 45-yard drive that reached into Roosevelt territory, Berthoud’s only serious threat to score in the first half ended in unceremonious fashion when the Spartans lost a fumble. Two possessions later Berthoud forced and recovered a fumble but gave the ball right back when Roosevelt cornerback Mason Holguin intercepted a pass by Berthoud quarterback Ty Beaman.

“Right now we’re still trying to get all 11 guys to execute and do their job on every play,” Berthoud head coach, Troy Diffendaffer, said after the game. “When we do (execute), we do good things; we’re able to rise up and stop people; we’re able to move the ball. But it’s when we have that hiccup and we have eight or nine guys doing their job but two or three guys forget what’s going on or they miss an assignment or something like that and it turns into a big play.”

Roosevelt attempted, and completed, only three passes on the night but rushed 40 times for an astounding 305 yards, controlling both the clock and the line of scrimmage. The ‘Riders scored twice on special teams, Beall’s opening kickoff return and on a blocked punt in the second half that gave the 2015 state runners-up a 41-0 lead and instituted the running clock mercy-rule.

“We jump off-sides on a fourth down or we lose sight of a receiver and he goes for a big play or we don’t step up and fill a gap and it goes for a long run or we drop a pass … it’s just little pieces of the execution that our guys need to continue to work on,” Diffendaffer said.  “Our kids just have to find a way to execute when they’re called upon and hit their assignments.”

A pair of scary moments, literally within minutes of one another, occurred for Berthoud late in the game. Upon fielding a punt, star receiver and cornerback Wyatt Woodrick got hit from multiple angles and dropped to the ground. Woodrick was taken via ambulance to the Medical Center of the Rockies after experiencing numbness.

Good news came down Saturday that Woodrick suffered a stinger and sprain and will miss the rest of the 2016 season but is otherwise expected to be just fine. Beaman was hit a few plays later and suffered a concussion but will also make a full recovery and be ready for action next fall.

Berthoud (1-6, 0-2 conf.) play their last road game of the season on Oct. 21 when they travel to Frederick to take on the Warriors (1-6, 0-2 conf.). The Spartans close out the season with a pair of home games against Holy Family and Mead on Oct. 28 and Nov. 4, respectively.