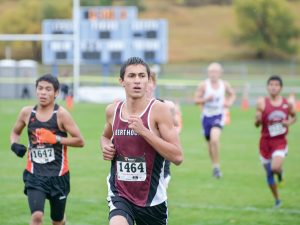 Elijah Grewal ran one final race as a Berthoud Spartan this summer as he competed in the Colorado High School Athletic Association’s (CHSAA) All-State cross-country meet, which was held in Alamosa in June. Part of the time was spent watching the CHSAA All-State football and volleyball games and meeting other top athletes from around the state. But the most important part came when Grewal toed the line to represent Berthoud High School (BHS) for his last race. Grewal covered the hilly 5K course in 18 minutes, 10 seconds and finished sixth place.

In August the recently graduated Spartan heads to Illinois to further his education and running at Lincoln College in Lincoln, Ill. Grewal will be coached by Brian Herron who has done a great job in developing distance athletes and moving them on to the Division I level just as he has done for BHS’ cross-country and track coach, Jordan Jennings. Jennings ran for two years at Lincoln and then transferred to St. Louis University and competed at the Division I level where he was very successful.

“Elijah has the potential and drive to accomplish great things at Lincoln and beyond,” Jennings said. “My goal for him is to earn his associates’ degree from Lincoln.”

Grewal plans to study sports management and acting. He will run both cross country and track for the Lynx. Lincoln College provides Grewal an opportunity to compete at the junior college level for the first two years and then a possibility to transfer to a larger college or university without having to sit out the mandatory year of all of the other NCAA divisions. Grewal has a strong shot at qualifying to the national championships in track as a freshman or sophomore, as his high school times are already close to the standards.

One of the things Grewal liked about Lincoln is Herron offered him a scholarship the first time the two spoke.

“He is bold and brave, and I liked that,” Grewal said. “It’s a great place and location and they have what I want to study. I am very grateful and overjoyed to be given the opportunity to run at the next level and showcase my talents as a runner.”

Courtney Mills (BHS class of 2012) – Mills transferred to Wichita State in 2015 to compete at the Division I level. Before that she was third in the indoor NAIA Championships in 2013 and won nationals in 2014 in the triple jump. Mills placed eighth in the Missouri Valley conference championships this season.

Anna Megenhardt (BHS class of 2013) – Megenhardt earned All-American status by placing eighth at the NAIA outdoor track championships in the pole vault, jumping 3.7 meters (about 12 feet 1.5 inches) for Hastings College in Nebraska. Megenhardt’s performance ties the school record for the pole vault. She placed 12th in the NAIA indoor nationals in March.

Luke Spitz (BHS class of 2015) – Spitz started the cross-country season off with a bang making the traveling squad for Colorado Mesa University. Spitz placed sixth on the team before injury hit. The injury lingered throughout the outdoor season so Spitz red-shirted the indoor and outdoor track seasons. Spitz can be seen training in the foothills around Berthoud to be ready for this upcoming cross-country season.

Kiah Leonard (BHS class of 2015) – Leonard competed at the University of Wyoming, becoming enlightened by the level of competition at the Division I level. Although there were 21 women on the cross-country team, Leonard was able to make the traveling team and became a scorer at the Mountain West Conference and the NCAA Mountain region meets. She was the fastest freshman in the mile meters in the indoor season, winning the Rocky Mountain Classic in Laramie. Leonard switched to the steeple chase, an event she had never tried, for the outdoor season. This event proved challenging for the freshman who is looking forward to becoming much better at running 3000 meters over 28 hurdles and seven water jumps.