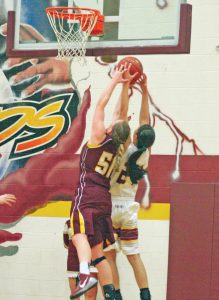 Berthoud’s Taylor Armitage grabs a
rebound during the contest versus
Windsor on Feb. 10.
Karen Fate / The Surveyor

It is amazing how quickly two teams’ fortunes can turn.

On Tuesday night in Windsor, the fortunes of both the Lady Wizards and the Lady Spartans turned in the span of about 17 seconds. Things flipped rapidly in Windsor’s favor with just over three minutes remaining in the game, as the Lady Wizard’s leading scorer, junior Amanda Ward, scored six points and forced two Berthoud turnovers to turn a one-point Berthoud lead into a five-point advantage for Windsor.

The Lady Wizards did not relinquish control as they played out the final two-plus minutes of regulation to win the game 50-44 and, in so doing, completed a season sweep of the Lady Spartans and claimed sole possession of second place in the Tri Valley Conference (TVC).

“We just didn’t take care of the ball, we made bad decisions with the basketball and tried to get it to people that weren’t open,” said a nearly-despondent Berthoud Head Coach Randy Earl when asked after the game about the short-but-decisive sequence of events late in the fourth period.

“Honestly I’m not sure really what happened. We just didn’t execute, we didn’t calm down, and they are a good basketball team, we have to give them that. We were right there with them, but it’s just those simple mistakes that put us right behind,” explained junior center Taylor Armitage. “We did not quite keep our momentum going and that was our error…it just sucks.”

Armitage turned in an All-Conference-caliber performance on the night, tallying team-highs in points (20), rebounds (9) and steals (4) and her six assists were second-most on the Berthoud squad to fellow-junior Kristina Cavey’s seven.

While they were never in outright control of the game, the Lady Spartans methodically built a lead and proved able to match, and surpass, whatever Windsor threw at them. A pair of lay-ups from Cavey and another from Sarah Howard erased a five-point Wizards advantage to put Berthoud up 13-12 by the end of the first.

A lay-up from Cavey and two free-throws by Armitage helped extend Berthoud’s lead to 17-14 at the 5:13 mark in the second. Armitage scored twice more from the floor, and Cavey added another from the charity stripe to put the Lady Spartans up three, 22-19, at halftime. Berthoud finished the opening 16 minutes of play having shot 50 percent (8-of-16) from the floor, far better than Windsor’s 6-for-22 effort.

Armitage hung eight on the board in the third period while Cavey and junior forward Maria Fate each contributed another two that gave Berthoud their biggest lead of the game, 34-25.

It was then, in the opening minutes of the fourth and final period, that the Lady Wizards decided they were not going to go quietly into the warm winter night. Windsor quickly assembled an 11-4 scoring run to get to within one, 38-37 with 4:28 left on the clock.

Then came Ward’s 17 seconds of fury and Berthoud suddenly found themselves down by five. A quick pair of baskets from Armitage and Audrey Kouns swung the pendulum of momentum slightly back in Berthoud’s favor, putting the visiting team down just one. Yet the Lady Wizards withstood the surge, making three of four free-throw attempts and rebounding and scoring on the one they missed in the final 60 seconds of play to hold on for the win.

“Yeah, that’s twice we should have beat these guys but we turn the ball over, don’t run much offense in the second half, and we end up losing the game,” Earl said. Berthoud was out-scored 6-0 in overtime against Windsor in the teams’ previous meeting on Jan. 16 at Berthoud.

Despite the rivalry’s storied history, it’s one in which there is mutual respect on both sides.

“I think we’re almost equal with our talent, so I think that gives us both a run for our money. Every time it makes it an exciting game, it’s intense, it’s aggressive, and either team comes out on top but never by much,” Armitage said. “I have a lot of respect for those girls, they can hit their shots, they play some mean ball.”