The final results might not have been exactly what he wanted, but he had every reason on Earth to be proud.

Berthoud High’s Wil Moneypenny, wrestling in the 145lb class at this past weekend’s state championship meet, claimed the bronze medal. The junior, making his third appearance at state, suffered a defeat via fall in 4:24 in the championship semi-finals to eventual state runner-up Jonathan Malovich. Moneypenny, at some point in the match, suffered an injury. 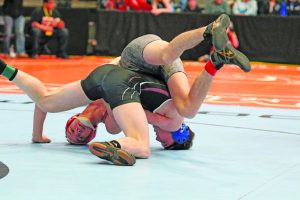 Photo by ACP Media – Berthoud High junior Wil Moneypenny earned his second regional championship and his third trip to state wrestling this winter. Moneypenny overcame a shoulder injury in the championship semifinals to win both matches on Saturday and take the bronze medal in the 3A 145lb weight division.

Following the defeat, Moneypenny, accompanied by Berthoud Head Coach Josh Galindo, was seen sitting in the off-mat warmup area receiving medical attention. There were questions as to whether Berthoud’s star junior would be able to compete in Saturday’s consolation matches. Galindo said early on Saturday morning, “Wil is feeling good this morning, a little tight but he is ready to go.”

True to the toughness and grit he has demonstrated since his freshman season, Moneypenny donned his singlet and headgear and attacked his matches on Saturday morning, despite the injury suffered barely 12 hours earlier.

Entering the third-place match just a short time later, Moneypenny was money. He scored four points to take the lead in the opening two minutes, two points coming for both a takedown and near-fall. He did not relent, adding two more on another takedown before securing Kyler Liddell of Alamosa to the mat to win the bronze emphatically; the final whistle coming at 2:01.

Moneypenny’s pin in the third-place match was his third win via fall in the five matches in which he competed over the weekend. Berthoud’s star junior won win pins over Joseff Rivera and Kyle Owen in 1:22 and 3:15, respectively, to advance to the championship semis.

Berthoud’s other two state qualifiers – junior Evan Torres and senior Tanner Coble – each turned in showings at state of which to be proud. While both suffered defeats in the opening round and were bounced to the consolation bracket to begin Friday morning, each was able to work their way to wins in the second day of competition.

Torres, wrestling in the 152lb weight class, suffered a defeat to Josh Brockschmidt of Gunnison after wrestling tough for nearly the full six-minute match. Torres managed to score three on an escape and takedown in the second period, but Brockschmidt added three points of his own in the third before earning the pin at 5:45. Torres then won an epic match that went into overtime on Friday morning, scoring two points on a near-fall in the third period to knot at the match at 4-4 at the end of regulation. Using the cardiovascular endurance he has gained as a top-tier performance in cross-country and track, Torres went into OT with an edge and made it work, scoring two points on a takedown to win the match 6-4.

For Coble, an already accomplished athlete as a nationally ranked sport shooter and All-Conference football player, making state as a wrestler was the goal for his last sport in his senior year. After losing a 3-1 decision in the opening round, Coble earned an 8-4 win over Santos Salmeron of perennial power Fort Morgan in the opening consolation round. Trailing 2-0, Coble worked and escape and takedown to take a 3-2 lead and, after a scoreless second period, responded to a Salmeron with a reversal and three-point near-fall to take the match.

Coble will be the lone varsity wrestler lost to graduation this year. The Spartans will attack next season with a full complement that includes not just Torres and Moneypenny but underclassmen Jacob Montoya, Ty Fanacht, Peter Young, Trevor Moore, Blake Coble and Ian Richardson, all of whom grew and matured and were right on the cusp of state berths this season.