Spartan Football ready to take the next step

Entering his fourth year as head coach of a football program he has been a part of since his youth, Berthoud High School (BHS) head football coach, Troy Diffendaffer, has the same gusto he has always brought to the field. 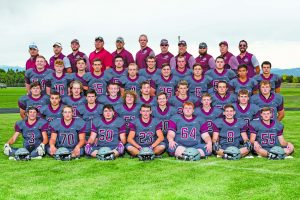 “It’s the old Herm Edwards thing, you play to win the game,” Diffendaffer said on Monday evening. “If that’s not what we’re about, we’re in the wrong place.”

Yet, as the coach explained, there will be a larger focus for the BHS football program this year. An educator nearly as long as he has been a football man, Diffendaffer knows the importance high school sports play in the development of young people. He believes the investment he and his staff are making in developing young men of high character will pay dividends on the field.

“We keep talking about our mission statement, which we call three-dimensional coaching … we inspire our athletes to be outstanding in the community, in the classroom and on the field,” Diffendaffer said. “And when we do that, we believe the scoreboard will take care of itself at the end of the day.”

Berthoud took their lumps in 2016 with an extraordinarily young and inexperienced team, but returns a large corps of players who Diffendaffer is adamant learned, grew and matured from last season to this. He called the growth he has seen from the end of last season through the spring program, summer camps, preseason practices, and the team’s recent scrimmage “tremendous.”

“We’ve seen tremendous growth; (last year) we would be dropping balls, not making big throws, if we gave up a big play on defense it would hang around and haunt us a little bit. That’s not us this year. We’re growing not only maturational, but physical(ly) too,” Diffendaffer said.

Diffendaffer said even with some changes to the coaching staff, the focus will still be on putting players in the best possible positions to find success; the team will adapt their scheme to their talent, not the other way around.

“We feel we’re going to have a lot of improvement team wise, we have great team chemistry, all of the kids are working hard and that’s a great thing for us. We’re making it fun, the kids are having a lot more fun this year, and they’re all getting better with all their skills and techniques; we feel we’re moving in the right direction,” Diffendaffer said.

Berthoud will open the 2017 season on Thursday, Aug. 31, when they travel northeast to take on Greeley West at 7 p.m. The Spartans will welcome Lutheran High School to Max Marr Field at BHS for their home opener on Friday, Sept. 8.