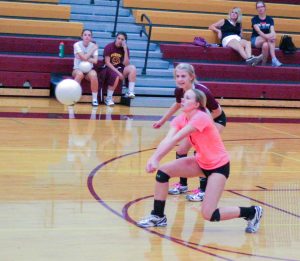 Haley Hummel is lined up for a perfect pass while Alyssa Peacock looks on against Windsor on Sept. 18.
Paula Megenhardt / The Surveyor

The Windsor Wizards couldn’t conjure up a win for their homecoming match, losing to the Spartans in three sets on Sept. 18.

“We beat Windsor which hasn’t happened in six years,” said Berthoud head coach Daisha Agho. “I was jumping around like a kid in a candy store.”

The first set against the Wizards was a kill fest with Jessa Megenhardt distributing the sets among the hitters to gain a 21-13 lead. The Spartans let their guard down and the Wizards came back, making it a close match that ended 25-23.

Berthoud kept the lead most of the second set, but only by a small margin of one or two points. The Wizards surged at the end, tying the score at 24. A serving error by the Wizards followed by a block on Alyssa Peacock that landed out of bounds ended the set 26-24 in the Spartans’ favor.

When Agho called a timeout during the second match, a voice from the huddle was heard saying, “This is our game.”

Sure enough, the Spartans came out determined in the third set gaining the lead, 15-9, at which point the Wizards head coach LaVerne Huston called a timeout. Agho took this time to let her team know that they can relax a little bit and play volleyball instead of being so uptight.

The lighter approach worked like magic for the Spartans, winning the last set 25-14.

“I was trying to keep the girls excited and light,” Agho said. “They were a little too serious.”

Hannah Atkinson had 16 kills, Haley Hummel had 33 digs for the match while Megenhardt had an astounding 41 assists, averaging nearly 14 per set. Berthoud is now 5-1 in the Tri Valley Conference.

“We’re second in our league and that is amazing, said senior Madi White. “Our team is so excited. We can’t wait to take Mead so that we’ll be first.”

Be sure to pick up the Sept. 25 Berthoud Weekly Surveyor for complete details from this game and from the Spartans’ home contest vs. Holy Family on Sept. 23.