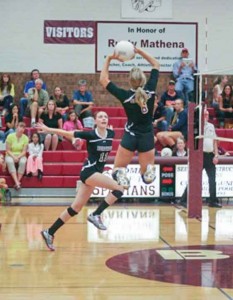 Berthoud’s Madi White winds up for a kill on Jessa Megenhardt’s set against Resurrection Christian on Aug. 28.
Paula Megenhardt / The Surveyor

The Spartans volleyball team did what was necessary for a come from behind win in five sets over Erie Tuesday night.

Coach Daisha Agho gave middle Madi White and outside Alyssa Peacock a break near the end of the second set to help them get back on track.

To get her head back in the game, White said, “I put on my mad dog face. I told myself that every ball was going down on their side. I think the whole team got their emotions together and we played as one team.”

The last three sets looked nothing like the first two. Berthoud came out bent on turning the match around. They picked up the dumps from the Erie setter, put up steely blocks, dug up the hard hits, and the Jessa Megenhardt – Hannah Atkinson combo rocked with 15 total kills, 11 of those coming in the last three sets.

“It’s a mental piece … you just gotta say, ‘Make them make the mistakes,’ ” said Peacock. “This whole match shows how amazing this season is going to be. How we can pull through and just beat anyone.”

Haley Hummel’s serving run helped give the Berthoud Spartans a win for the first set in the match lost to Resurrection Christian School at the Aug. 28 volleyball home opener at Berthoud High School. The team fought hard and made Resurrection work for nearly every point they scored on Berthoud.

The Spartans came out confident and toppled Resurrection 25-20 in the first set. But in the end, missed serves and trouble on the serve-receive brought the Spartans down in the next three sets, 20-25, 24-26, 18-25.

Coach Daisha Agho wasn’t too concerned with the loss.

“I think most of it was just nerves, first game, first night home,” Agho said. “If we get our serves in, the rest of this season is going to be amazing.”

Going up against last year’s 2A State Champion who went 29-0 in 2013, the lady Spartans showed strength and cohesiveness on the court.

“They have phenomenal hitters on the outside and even in the middle — for us to get touches, blocks and get our timing right, I can’t even tell you how many goose bumps I got tonight,” said Agho. “It was just really, really exciting.”

Berthoud’s middle hitter Shaylee Pierick was optimistic about the outcome.

“I had some good blocks on their outside,” she said. “I think it was a really big event for our team that we took a game from Resurrection.”

The players were in good spirits throughout the match. With hugs and high-fives they gave each other on the court, they know the work it will take to come out on top in the future.

“We played really strong tonight and even though we lost, it was a really tight match. We wanted to pull out the win on that third set. It was a critical point for the match. To win, we need more mental toughness and make our serves,” said setter Jessa Megenhardt.

The next Spartans home game is Sept. 4 against Skyline High School.