Rough Riders get thrown by Berthoud 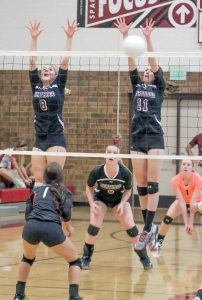 The Lady Spartans focused on energy, communication, and having fun, to sweep the Roosevelt Rough Riders in three sets, 25-21, 25-17 and 25-23, on their home court.

“Playing a team and trying to beat a team for the third time in one season is usually pretty tough, and I think they handled the pressure of that piece very well tonight,” said head coach, Daisha Agho.

Berthoud gave up the first point of the first set but held on to the reigns from there, keeping a lead of five points or more during most of the set. When the Spartans were up 17-11, Rough Riders’ head coach, Emilee Braunsroth called a timeout to re-group her squad. Roosevelt was able to cut down Berthoud’s lead to three at 23-20, when Agho called a timeout. Berthoud only gave up one more point, winning the match at 25-21.

The Spartans and the Rough Riders battled point-for-point up to a tie at eight where the Spartans began to pull away and eventually finished the second set at 25-17.

The Rough Riders stepped up their play in the third set knowing it was do or die, while the Spartans became over confident and a bit lax in their play.

“We were confident in the third game, but it ended up being cocky, so we ended up pulling back and playing lazy,” Hannah Atkinson said.

The teams were once again tied at 8 in the third set, but it was Roosevelt that began riding away toward a win, gaining a 9-point lead on the Spartans, 10-19. Haley Hummel came in to serve and the Spartans cut the lead down to two points, 17-19 before losing the serve.

“I started to think that we needed to back up the server. That’s the only way we’re going to get a run and get points back,” said Alyssa Peacock.

Atkinson had a particularly fierce kill followed by a huge hug to setter Jessa Megenhardt. They hadn’t taken the lead yet but knew they had changed the course of the momentum. The set was tied at 23 when Berthoud got a side out. Peacock finished the match with a kill into a Roosevelt block that landed mid court on the Rough Riders’ side.

“The thing that we did tonight was cover the blocks and the weird off-balls. We also energized each other,” said Atkinson.

The timing between the setter and hitters was on tonight. Megenhardt put up 40 total assists, 5 kills and 2 blocks. Atkinson had 16 kills and 40 digs. Senior Madi White put up key blocks, getting points on three and putting down seven kills. Peacock had nine kills and 30 digs, while libero Hummel let few balls get past her with 46 digs. Shaylee Pierick defended the court with numerous big blocks but just one went down for a point. Julie Ward had six kills and 13 digs.

“Our blocking was on, which we haven’t seen our last couple of games. It needed to be with the type of defense we needed to run,” said Agho. “They played well at home, finally. I’m proud they could do it tonight. I’m really happy with the choices they were making. Our setting, moving it around, that was huge. Jessa did a great job with her options. 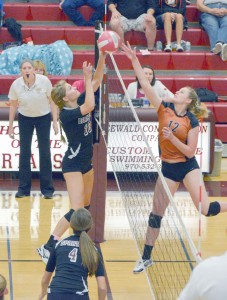 Berthoud’s Hannah Atkinson battles for a point against Mead’s Sarah Steele on Oct. 2 at BHS. John Gardner / The Surveyor

The Berthoud volleyball team had high hopes for a win against Mead to secure first place in the Tri-Valley Conference, but it wasn’t meant to be. The Spartans lost at home to the Mead Mustangs in three sets, 21-25, 22-25 and 27-29.

It was an off night for the Spartans. Although they expected a battle, they also didn’t play up to level they have played all season.

“We played against ourselves tonight, instead of being a little more competitive. We were off on our fundamentals. Just a little disappointed that we couldn’t pull that piece together,” Agho said.

Mead had a few runs on the Spartans in sets one and two that were difficult to overcome. The Mustangs also put up huge blocks and covered the court well, which virtually shut down the Spartans. Tenacious hitter Hannah Atkinson had only six kills on the night. Alyssa Peacock had the team high with just seven. Agho said that they worked on getting around the block in practice and were looking confident, but it didn’t actualize on the court.

In the third set Berthoud had more of their competitive attitude back, pushing the set to 27-29.

“They kind of looked scared on the court instead of that competitive attitude, ‘Ok, we got this!’ We got a burst of that, but it wasn’t enough to win the match,” said Agho. “They got to get hyped up for a game when they’re playing the number-one team in the conference. The fact of the matter is, we lost, and we have some work to do tomorrow.”