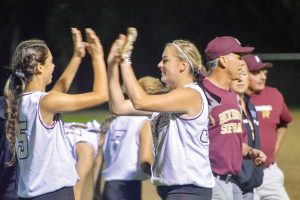 The cool, dreary, overcast weather at Bein Field on Friday night gave the game the feel of October rather than August softball. And the Lady Spartans looked to be in October form as they routed the visiting Thompson Valley Lady Eagles 13-3.

“I don’t think the girls realize how good they are,” said Head Coach Ashtin Williamson after the game. “They’re scary good; this is a championship-quality team.”

Berthoud coupled a small-ball approach from the top of their order – leadoff hitter Hannah Langer reached base in all four of her plate appearances and two-hole hitter Sydney Kouns put down successful sacrifice bunts in the first, second and fourth innings – and then allowed their power hitters in the heart of the order, Taylor Armitage and Jessi Boruff, to clean up the base pads.

Langer said that she likes the small-ball approach with the top of the order.

“With the players we have, they’re quick, they’re fast, they’ll lay the bunts down,” Langer said.

The sophomore catcher added that she embraces her role as the leadoff hitter.

“I just do what my coaches say and then I know the people behind me will do their job and push me around [the base pads],” she said. “I just try to get on base, move a runner if there is one on base, just make a movement somehow.”

Armitage and Boruff, hitting third and fourth in the order respectively, combined for eight of Berthoud’s nine RBIs on the night. Boruff, playing in her customary centerfield position, was named player of the game with a three-for-three, five RBI night from the plate. 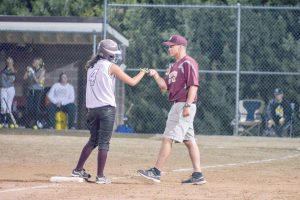 Hannah Langer gets a fist bump from assistant coach Anthony Heronema after making it safely to third base in the home opener against the Thompson Valley Eagles on Aug. 22.
John Gardner / The Surveyor

Berthoud did have some early hiccups in the field where a pair of errors in the field in the first two innings allowed the visiting Lady Eagles to cross home plate twice. Despite the miscues, Berthoud stayed in control of the game, tightened up their defense and held a 5-2 lead by the end of the second frame. Three singles from Delaney Fouts, Langer and Armitage sandwiched a Kouns’ sacrifice bunt before a Boruff double and a pair of passed balls by Thompson Valley allowed three Lady Spartans to come home and give Berthoud the three-run advantage from which they would not look back.

Armitage, in addition to going four-for-four with a two-run homer in the fourth that put Berthoud ahead 7-3 and chased Thompson Valley starting pitcher Karli Kramer from the game, threw a gem from inside the circle, surrendering just two hits and one earned run on the way to her first win of the young 2014 season.

Trailing 9-3 in the top of the fifth, Thompson Valley did their best to make things interesting. With two outs in the frame, the Lady Eagles worked three-straight walks to load the bases. A quick pitcher-catcher conference between Armitage and Langer settled the situation and got Mariah Diediker to pop up to Fouts at second base.

“I learned last year about communication,” Explained Langer on her role as a catcher working with the pitchers and setting the Lady Spartan’s defense. “When I’m out there catching I’m in charge and I need to tell everyone what’s going on because I can see the whole field.”

Perhaps spurned on by getting out of the bases-loaded jam with no damage, Berthoud added four runs in the bottom of the fifth to get the mercy-rule win in five innings. Back-to-back doubles from Armitage and Boruff, a couple Eagles’ errors and stolen bases by Kouns and Langer were enough to push the lead to 10 runs and clinch the win for the Lady Spartans.

“It feels great,” said Langer following the game. “We have this win under us and we know we can get any team out there so we just need to go do it!”

The Lady Spartans kept their winning ways going Tuesday afternoon against Tri-Valley Conference rival Mead. Berthoud won 9-2 over the Lady Mavericks and in so doing improved their season record to 2-1 with a 1-1 mark in the TVC.

Armitage notched three RBIs in the game on a two-for-four effort from the plate that included her first triple of the season. Boruff, Langer and Madi Herbert also had multi-hit games while Nicole Maheu and Lindsay Erickson drove in their first runs of the season.

Pitcher Larssia Royer tallied her first double of the year while making her first start from inside the circle. The junior picked up right where she left off last season with a complete game effort, surrendering only one earned run on her way to being named player of the game by Coach Williamson.

The Lady Spartans will look to keep their winning streak alive against TVC foe Roosevelt in a contest in Johnstown on Aug. 28. Berthoud will return home Sept. 2 for another conference game facing the Frederick Warriors.