Berthoud High School senior wide receiver Jackson Hall had an exceptionally good season as one of the most dominate wide receivers in the state in all school size classifications. 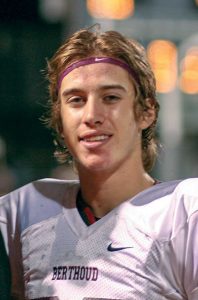 The 2015 regular season saw the Berthoud senior finish tied for fifth place in the state in touchdowns, 12, and was No. 8 in receiving yards with 995. He also was fifth in the state in punt-return average –19.1 yards per return and finished third in the state as a wide receiver in all-purpose yards with 1,510, trailing D’Evelyn High School’s Charlie Davis (1,641), and Elizabeth High School’s Tyler Curtis who had 1,640.

More impressive than his 2015 stats are his career accomplishments.

Hall ended his high school career with 29 receiving touchdowns, totaled 2,179 receiving yards and hauled in 120 catches. He finished his career No. 2 in touchdowns and receiving yards, as well as third in receptions for all Colorado High School Activities Association (CHSAA) seniors from the 1A to the 5A classifications.

“It feels good to be recognized for what I’ve accomplished during high school and I’m very proud to represent my school,” Hall said. “But a wide receiver can only catch what is thrown to him and I owe much of the credit to Cody (Braesch) Nick (Dietz) and Brock (Voth) getting me the rock the past three years and of course the big guys up front giving our QBs time throw.”

Hall’s 1,510 all-purpose yards in 2015 was the second most of any high school football player at any position from Larimer and Weld County.
Kieler Harpham, from Fort Collins, led Northern Colorado wide receivers with 1,555 all-purpose yards. Gary Rodriguez Jr. from Valley High School (1,205), and Kaylor Werner from Northridge (1,186) were third and fourth, respectively, in the region.

Additionally, Hall added an 86-yard punt return for a touchdown, giving him a total of 13 for the season and 30 for his high school career. In addition to his wide-receiving credentials, Hall also passed for a 62-yard touchdown, was the team’s punter, as well as a kick-off and punt returner, and led Berthoud’s defense in interceptions with three this season.

In lacrosse, Hall was Second Team All-Conference as a junior and received the All Heart Award from his team two years in a row.