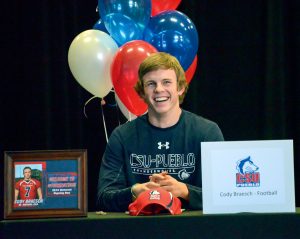 Berthoud High School senior and quarterback Cody Braesch is all smiles right before signing his letter of intent to play football at Colorado State University — Pueblo. Braesch along with four teammates signed letters to play in college next fall. It was the most athletes the school has had sign for football in school history.
John Gardner / The Surveyor

There is perhaps nothing more rewarding than attaining a goal one has set themselves. That could not have been more plainly evident than when five Berthoud High School (BHS) football players put pen to paper to commit their services to play college football on Feb. 3. The pure joy of the five young men – Cody Braesch, Steele Castles, Chad Ellis, Jamie Gray and Jackson Hall – was obvious to anyone in attendance.

“There is nothing that beats this day, all the stress of the last month and all the seasons and all the games, it all leads up to this moment and this moment is just euphoric,” said Hall, who committed to play wide receiver for the Concordia University Bulldogs in Nebraska. “It’s an amazing feeling, I don’t think I can compare it to anything else, but I can breathe now,” added Gray, who had a smile a mile wide after committing to play linebacker and long snapper at Black Hills State University.

By reaching their goals and having the burden of the decision-making process in their proverbial rear-view mirrors is something that each remarked was an enormous weight lifted off their shoulders.

“It’s very nice. My work load went from staying up until 11 or 12 o’clock every night, stressing out, trying to get stuff figured out, applying to a million different schools, and now it’s nice because I can just hang out with friends and get to do all the fun stuff that seniors normally do,” explained Ellis, who will play safety at Oklahoma Panhandle State University.

Ellis’ situation was unique as, in addition to being a stellar football player, he is also a standout track athlete and state champion wrestler. Yet Ellis explained football was always number one for him and, even if he could have wrestled collegiately, football is where his passions lie.

“Ever since freshmen year, when I came in I met a lot of people who really turned me on to football,” said Ellis. “And ever since, that was where my passions developed.”

Each talked, rather poignantly, about how the lessons they learned through the process of not only playing football but playing it a level high enough to earn a college scholarship.

“The biggest thing I’ve learned is that the most important thing about football is the people who you get to surround yourself with; your teammates, the brotherhood, the coaches, and learning things like respect for them and yourself and for the community and hard work, things can be used in other aspects of your life, those are the most important things I’ve gotten out of football,” Braesch said.

Braesch, who will play quarterback at CSU-Pueblo, was blessed with a physical stature that gave him something of a leg up on the field and explained that overcoming the mental hurdles were his biggest challenge.

“Starting off young I was not very good, I had no idea what I was doing out there (laughs) … so I guess the hardest part has been overcoming the mental part of it, being confident in myself that ‘hey I can do this, I can be good at this, and I can go as far as I want with this.’”

Castles, also an impressive physical specimen, had to overcome a different challenge, namely that of being asthmatic. Castles explained, while he has learned how to cope with the condition on the field, it is physically taxing and having battled through it has helped him discover mental and physical strengths he did not know he possessed.

“It’s just a matter of wanting to be better than everyone else, wanting to get there,” he said. 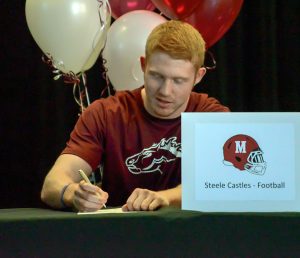 Steele Castles signs his letter of intent to play football during a signing ceremony at Berthoud High School on Feb. 3.

Castles will play defensive end at Morningside College in Sioux City, Iowa, and explained the decision to commit there was a relatively easy one.

“Choosing Morningside was pretty easy, they have the major I want, 15-people classes, and a really great team, a winning team.”

It was a more difficult decision for the other four. Hall visited several schools before finding “the perfect fit,” at Concordia. “I felt like it was my home away from home, and I felt like that was a place I could be for four years, and that’s what you have to look for. I loved everything about the school and the area,” said Hall.

Braesch said his decision came down to three things – finding a good football program in a welcoming environment at a school that offered good academic benefits, “I had it narrowed down to two different schools, CSU-Pueblo and UNC … and I just decided that CSU-Pueblo wins football games; it’s very successful program; they know what they’re doing down there; the coaches are great; the community is amazing; they love football. CSU-Pueblo also has a really good business school, in the top 5 percent of business schools in the world, so it’s those three things; the people, the academic side, and the football side of things were the most important to me and CSU-Pueblo was up very high in all those categories.” 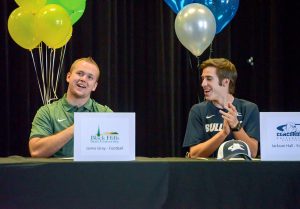 Ellis and Gray both remarked that an important aspect for them was finding a place where they felt their services were coveted by the football program.

“I think the defining moment was when I went down there and they put their money where their mouth is and made me a good offer,” Gray said. “They really wanted me as a linebacker and a long-snapper.”

Ellis described the early part of the process as “disheartening,” saying he expected to play at the Division-I level but slowly learned there were plenty of other options out there.

“But then you meet coaches and learn about programs that have faith in you. The coaches were really down to Earth and they were really upfront and honest and good people, and that’s exactly what I want to be around,” Ellis said. “It’s pretty cool, especially the scholarship part, because you’re not putting yourself out there to try to earn someone’s trust, you’ve already got it because of what you’ve already done.”

Having five football players from a single senior class commit to play football at the next level is the most ever in the history of Berthoud High School.

“You want to be better than everyone else, but at the same time, when you’re playing, it’s all about the team,” said Castles. “So you kind of have to sacrifice yourself for the team, that’s something that I take through my whole life.”